Come And Spend Time In "The Parlor" With Bluesman Alabama Slim 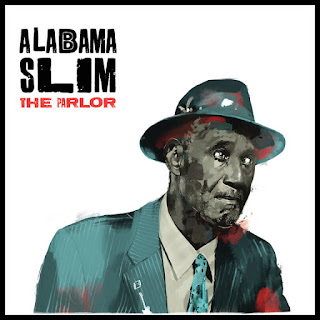 Veteran blues artist Alabama Slim is ready to release a new studio album titled "The Parlor" on January 29th, through Cornelius Chapel Records in association with the Music Maker Relief Foundation. Alabama Slim's music history dates back to the fifties and sixties, playing in juke joints in Alabama, before moving to New Orleans and teaming up with his cousin, Little Freddie King. Fast forward to June 2019 and Alabama Slim, Freddie King and drummer Ardie Dean recorded tracks for a new album in only four hours. During post production for the album, Jimbo Mathus (Squirrel Nut Zippers) and Mike Patton (Drive-By Truckers) added keyboards and bass to the album to create a timeless blues masterpiece.

The new ten track release begins with the John Lee Hooker-style boogie-woogie of "Hot Foot," as you can hear the raw, spontaneity in the recording. Freddie King sings lead on the classic, up-tempo swinging blues tempo of "Freddie's Voodoo Boogie," before the mood slows down for the deep New Orleans blues of "Rob Me Without A Gun," as you can't help but get lost in the melody. Not only will you simply fall in love with Alabama Slim's timeless vocals, but the beautiful interweaving of his and Freddie King's guitars on "All Night Long" is like a dance where both partners want to take the lead. The energy picks up with the toe-tapping rhythm of "Midnight Rider" and the steady guitar romp of the traditional feel of "Rock Me Baby." Alabama Slim and his band close out the album with the southern groove of "Someday Baby" and the slow, passionate performance of "Down In The Bottom." To find out more about this new album from Alabama Slim, please visit corneliuschapelrecords.myshopify.com.