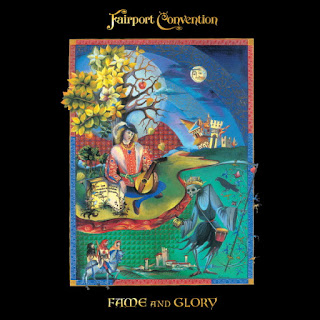 The British folk/rock band, the Fairport Convention are still going strong, since forming back in 1967. Their latest release is a collection of songs that the band created for a string of Alan Simon's rock operas over the years, including "Excalibur: The Celtic Rock Opera." Now, fans can appreciate having all of their collected work on one release titled "Fame And Glory." This was originally released back in 2009, but has recently been updated with the band's work on "Excalibur III," including a previously unreleased track, "Goodbye My Friends."

Highlights of this compilation includes live versions of the Fairport Convention songs "Celtic Dreams," "Morgane," "Behind The Darkness" and the title-track "Fame & Glory," which also appears in its studio version as well. The stellar musicianship that Fairport Convention display are present in the instrumental tracks "Beltaine" and "Dragon Breath." The final track on the album is the previously unreleased studio recording of the sing-along style ballad "Goodbye My Friends." To find out more about Fairport Convention and their latest release of "Fame And Glory," please visit fairportconvention.com.