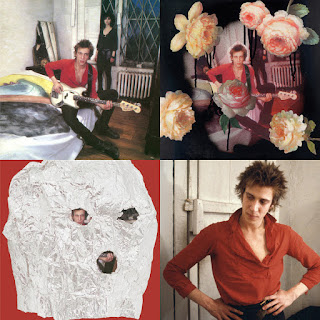 On January 22nd, Omnivore Recordings will be releasing a new compilation from Richard Hell & The Voidoids titled "Destiny Street Complete." This new 2CD set features four different versions of the "Destiny Street" album, which was originally released in 1982, following the success of the band's debut release "Blank Generation." Richard Hell has stated that he was never satisfied with the original release of the album, so this new set corrects that with not only a new remastered version of the original album, but also a newly remixed version, a raw, stripped down version and an album's worth of recorded demos for the album.

The new remastered version of the original "Destiny Street" album sounds ages better and returns it to its former glory and rightful place in the Richard Hell & The Voidoids catalog. Not only will fans be happy about that, but the second half of the first disc includes a stripped down version of the album, using the original two-guitars, bass and drum tracks. This actually gives songs like "I Gotta Move" and  "Lowest Common Denominator" a bit more punch, along with that perfect rough sounding punk edge that gave life to the punk music of late-seventies. This set of songs also include additional add-ons like some guitar solos and vocal adjustments recorded between 2008-2009. The length of the title song that closes out the "Destiny Street" album is almost doubled on the reimagined version of the album, as the band lay down a lengthy jam to finish things off.

The second disc starts off with a brand-new remix version of the "Destiny Street" album. Richard Hell had always wanted to redo the album, but the record company told him that the 24-track masters were lost. Then, in 2019 the masters to four of the album's song were discovered and this idea to remix the album was reborn. Richard Hell, along with Nick Zinner (Yeah Yeah Yeah), work to remake the album in the image that Hell finally felt satisfied with. You can hear a clarity to songs like "Downtown At Dawn" and "Staring In Her Eyes," as now this album has a timeless quality to it. A previously unissued bonus track, "Don't Die" has been added to the end of the album, which was discovered during the uncovering of the album masters.

A dozen bonus tracks made up of demos, single versions and a live take close out this second disc. Highlights include a pure adrenaline-fueled demo version of a song called "Crack Of Dawn," as well as raw, energetic rocker titled "Funhouse" and a nostalgic, sixties-sounding track called "Smitten." A live version of the song "Time," which was performed at the Robert Quine memorial in 2004, is the perfect final note in this chapter of the "Destiny Street" album. To find out more about this new two-disc set "Destiny Street Complete" and a vinyl-only version of "Destiny Street Remixed," please visit omnivorerecordings.com/richard-hell.