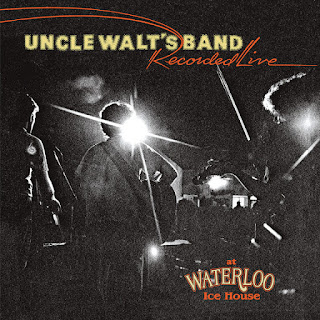 One of the best kept secrets to come out of Austin, Texas in the eighties was Uncle Walt's Band. Their simplified sound and three-part harmonies had a nostalgic appeal during a time when music was being slicked-up and overproduced. For the past few years, Omnivore Recordings has been reissuing Uncle Walt's Band's catalog with new, expanded versions of their albums. The newest in this set is their 1982 release "Live At Waterloo Ice House," which features the best of the threesome's four-night performance at this Austin venue. It was originally released as a private pressing, which quickly went out of print and included only fourteen tracks. This new expanded edition was remastered and includes 21 total tracks (7 from original release, 4 alternate versions and 10 previously unissued performances).

Every song is a delight to listen to, whether it's your first time hearing Uncle Walt's Band or your a long-time fan. These songs display how good of a live act this trio was. The simple acoustic strumming of "If I Don't Stop Crying" is the perfect backdrop for the meshing of their voices on this opening track. A seventies folk/rock vibe is certainly felt in "Mock, Mock, Mockingbird," along with the blues of "Stagger Lee." The energy keeps swinging with the country rock groove of "Honest Papas Love Their Mamas Better," before belting out the blues once again on the ballad "Bye, Bye Baby." The harmonies they project during "The More I See You" showcases how well their voices worked together, as well as in the up-tempo strumming of "I Gotta Know." Uncle Walt's Band is pure country on the early, classic sounding "I'm Gonna Break My Heart In Two," while "Georgia Rose" has that special nostalgic touch of a simpler time in music. The restoration and remastering by Grammy-winning engineer Michael Graves for this set is amazing, as each song perfectly compliments the next. A new twelve-page booklet is also included in this new release, which includes photos and liner notes from Austin music writer Peter Blackstock. To find out more about Uncle Walt's Band's new release "Live At Waterloo Ice House," please visit omnivorerecordings.com.