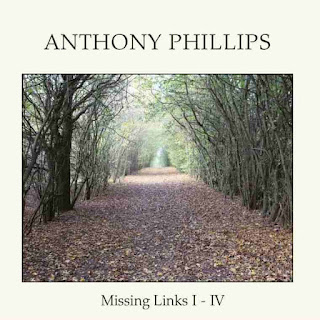 Legendary original Genesis guitarist Anthony Phillips recently released a newly remastered box set of his "Missing Links" albums volumes one through four, as a new 5CD set. This new release not only includes his collection of library and television music from 1979-1997 spread across two albums "Finger Painting" and "Time And Tide," but also features his great 1994 "Missing Links" album "The Sky Road," which highlights some of Phillips' more epic instrumental pieces like the "Lifeboat Suite" and "The Bitter Suite." He released is last "Missing Links" album in 2009 titled "Pathways & Promenades," which includes some of his most elegant pieces like the acoustic track "Promenade" and the gentle finger-picking of "Danza Cucaracha," along with the elegant soundscape of "Sky Dawn."

The new addition to this box set is a new fifth CD titled "Extra Missing Links," which includes 27 pieces of previously unreleased and rare archival material that has not appeared on any of Anthony Phillips earlier releases. The music jumps around from the eighties sounding "Great Rift Valley," to the island rhythms of "Sumatra," to beautiful solo piano piece "Tropical Moon Romance." Anthony Phillips showcases his worldly charm on the Indian instrumental "Sitar Pastoral" and the classical composition "Citizens Of The Coral." It is also enjoyable just to hear him and a guitar dance together as in "Granada" and "The Beggar And The Thief (instrumental version)." This new box set also includes liner notes from archivist Jon Dann, who work along side Phillips on this amazing new set. To find out more about this latest release from Anthony Phillips titled "Missing Links I-IV," please visit anthonyphillips.co.uk.