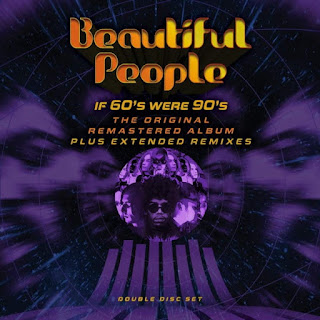 What began as a "one-off" dance/house track of sampled music from Jimi Hendrix has now turned into a two-disc set of remixes using over fifty samples of Hendrix's guitar riffs, vocal leads and word raps. The duo of Duncan Elder (aka Du Kane) and Luke Baldry came together  in the early nineties under the moniker, Beautiful People to create an album's worth of these remixes titled "If 60's Were 90's" and released it back in 1992. The album is now being re-released once again almost thirty years later with a remastered sound and the addition of newly extended remixes, making this one of the unique releases of 2021.

The original album begins with "Comin' To Get You," which combines techno beats and classic Jimi Hendrix guitar riffs and may be something to get used to for Hendrix fans. The music, along with the forgotten lyrics of "Foxey Lady" to make this a journey into modern technology. Beautiful People are great, creating spaced-out, psychedelic vibes, as demonstrated with "Get Your Mind Together," before also showcasing a mellowed out side with the R&B, jazzy groove of the title song "If 60's Were 90's."

If you enjoy what you hear with your trip through the original album, then you will love diving into the extended mixes. The new disc starts off with taking the song, "If 60's Were 90's" and letting PM Dawn remix it into a seven-minute escape filled with guitar riffs, smooth Jimi Hendrix vocals and steady dance beat, which adds another dimension to the track. The Well Hung Parliament remix of "Rilly Groovy" is full-on rave material which concentrates more on the electronics, than the samples of Hendrix. The funk flies high on "DIG!," which is filled with demo outtakes and word samples mixed together in a big pot of groovy beats and sounds.

British DJ, Youth has mixed an entire album's worth of tracks that will also be released as the "If 60's Were 90's: Youth Remixes." He adds a more ambient, disco, dance, club tones to the songs, drawing upon more of his house music experience giving an extra jolt of energy to the album. The highlight for me is the seven-plus minute remix of "The Experience," which captures the full essence of this release in this one new song. This set will be available on February 28th through Gonzo Multimedia as a triple CD set, as well as on purple vinyl. To find out more about this new release from Beautiful People, please visit musicglue.com/beautiful-people.