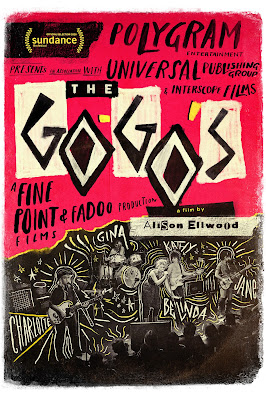 Available this Friday, February 5th is the award-winning documentary about the all-girl group, The Go-Go's. It premiered at the Sundance Film Festival in 2020 and won the "Best Music Documentary" and the 2020 Critics Choice Awards. Now the film is coming home on all digital formats for fans to enjoy.

The 98-minute documentary gives you the full scope of the band, from the members themselves. Director Alison Ellwood does a masterful job interweaving old footage and photos of the band and they describe their early beginnings, inspirations and rise to pop stardom. The Go-Go's were one of the pioneers of an all-female punk band in the late-seventies and were never shy from becoming better and bigger. Being an all-female band gave The Go-Go's many obstacles to overcome, as shown in the film, but they would eventually prove the record labels wring with hits like "We Got The Beat" and "Our Lips Are Sealed."

The documentary also dives into the dark side of the band's excess drug use, especially guitarist Charlotte Caffey's drug addiction, but only for a moment, before The Go-Go's became the face of a new cable access channel called MTV. While on tour with The Police, The Go-Go's debut album shoots up the chart and they make history by becoming the first all-female band to play their own instruments and write their own songs to have a #1 album on the charts. This also led to their demise, as cracks began to show in the band and the film does not shy away from what each band member was going through at the time. Original member Jane Wiedlin was the first to exit, which may have signaled that the end was not far away.

The film closes on a high note, as the members reunited, got a star on the Hollywood Walk of Fame, made a Broadway musical with "Head Over Heels" and have recorded their first song in nearly two decades with "Club Zero." This documentary also proves that The Go-Go's should be inducted into the Rock And Roll Hall Of Fame. For more information about "The Go-Go's" documentary, please visit gogos.com.