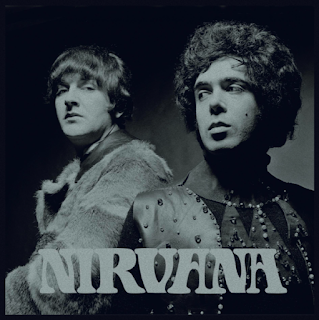 The rock band Nirvana (not the 90's alternative band) but the late sixties, early seventies British rock band is preparing to release a six disc box set titled "Songlife" through Madfish Music on February 26th. This new set will collect all of the band's studio albums, including their never before released 1972 album "Secrets." Nirvana was psychedelic art band lead by the duo of Patrick Campbell-Lyons and Alex Spyropoulos, who released their first album in 1967, which was a concept piece titled "The Story Of Simon Simopath," which is considered one of the first of its kind, pre-dating many classics like The Who's "Tommy" and The Moody Blues "Days Of Future Past." Nirvana also supported acts like The Jimi Hendrix Experience and Traffic during their live runs through England.

Nirvana's second album "All Of Us" followed the same experimental psych-pop of their debut release, but with more single-based focus on their songwriting. They did find minor success with the single "Rainbow Chaser" and the gentle ballad "Tiny Goddess," as this album paints the perfect picture of the psychedelic rock landscape in Britain in 1968. The band's third album "Dedicated To Markos III" or "Black Flower" found the band trying to hold on to that epic pop-rock sound, but the album only sold a small amount and was quickly deleted from the band's catalog, but tracks like "Christopher Lucifer" and "It Happened Two Sundays Ago" still carried their iconic sound that brought them stardom only three years earlier.

The set also includes the experimental, two-song suite "Local Anesthetic," which finally changed musically with the time and ushered in more funk and blues sound, but by this time only Patrick Campbell-Lyons was steering the Nirvana ship. Finally, before calling it quits in 1972, Nirvana produced one more album titled "Songs Of Love And Praise," which returned the band's original sound and presented some more iconic tracks like "She's Lost It" and "I Need Your Love Tonight."

The special addition to this new set is the recent discovery of the previously unreleased 1972 album "Secrets." This new fourteen-song set puts the perfect exclamation point on the lifespan of this psychedelic British rock band. Songs like the hard rocking "I Don't Care" and the soulful pop of "It's Good To Have A Heart" showed that their was still gas in the tank for Nirvana to succeed. Singer Sylvia Schuster also makes appearance on the ballad "Two Of A Kind," before the album closes with the funk-fueled "What You Do You Are" and the gospel-like finish of "Freedom Chaser."

Four of the six album have been remastered from the original 1/4 inch master tapes and the sound is stunning for being over fifty years old. A new 52-page booklet is also included with this set with previously unseen photos, posters, record sleeves and new liner notes from author Pete Doggett, along with interviews with Patrick and Alex on the history of the band. To find out more about this great set of classic British rock music from Nirvana, please visit madfishmusic.com/artists/nirvana.