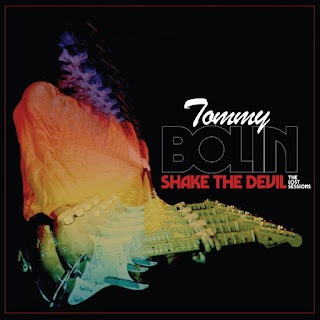 Legendary guitar prodigy, Tommy Bolin, who has worked with Deep Purple and The James Gang, created an enormous amount of music between 1969-1976. So much so that they are still finding new music to release nearly 55 years after his passing. This latest find is a recently discovered collection of "lost tracks" of demos and outtakes from one of his final recording sessions which ended up creating his last studio album "Private Eyes." This new set of songs will be released on February 12th through Cleopatra Records as "Shake The Devil, The Lost Sessions."

This new twelve song set begins with a rough, raw alternative mix of the song "Shake The Devil," which carries a funky backbeat and a great guitar/horn exchange to close out the song. The alternative version of "Bustin' Out For Rosey" sounds a little cleaner and could have replaced the original release from the "Private Eyes" album. Bolin's song "Gypsy Soul" appears on here three times, with the previously unreleased acoustic version giving the most meaning and allows you a special glimpse into the creative process. Speaking of demos, there is also and instrumental version of "You Told Me That You Loved Me," which doesn't add much to song, but shows the melody for the song was already in place on this early take. The five minute "Tommy's Instrumental" is a great piece, which finds Tommy and his band just jamming in the studio, as they are all locked together in a groove. The new album closes with an instrumental demo of "Someday We'll Bring Our Love Home," which only features Tommy's guitar work on this early idea of the song. To find out more about this new "Lost Sessions" release from the late, great Tommy Bolin, please visit cleorecs.com.