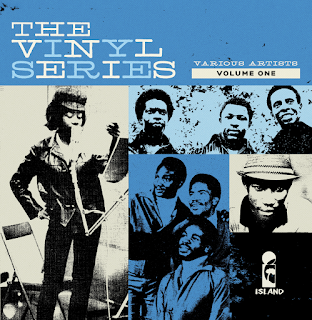 Island Records founder Chris Blackwell has curated a new music series on vinyl titled simply "The Vinyl Series." Volume 1 was just recently released and covers the years 1962-1969 of the Island Record label. Each side of the album contains seven tracks, which include highlights from Toots & The Maytals and Desmond Dekker & The Aces. Many of these songs paved the way for what would come in the following decades from Bob Marley & The Wailers and Jimmy Cliff.

This new release kicks off with the very early days of reggae music on record with the island groove of The Pioneers "Long Shot Kick De Bucket" and the original version of "Rivers Of Babylon" by The Melodians. Desmond Dekker & The Aces also introduce the world to ska music with the up-strumming rhythm of their famous hit "Israelites" and then deliver the music of their Jamaican roots with "007 (Shanty Town)."

Island Records also was the home of many pop hits like "My Boy Lollipop" by Millie Small and "Gimmie Some Lovin'," by The Spencer Davis Band, which featured a young Steve Winwood. Even Toots & The Maytals received world recognition with their single "54-46 That's My Number," along with the rhythm & blues style of "Harlem Shuffle," originally by Bob & Earl, but later made famous by The Rolling Stones. This first volume of "The Vinyl Series" lays the groundwork for even bigger success for Chris Blackwell and his Island Records label. For more information on this UMe/Island Records release, please visit udiscovermusic.com.