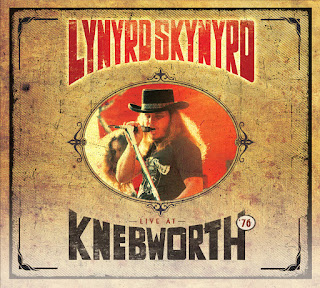 Back in 1976, Lynyrd Skynyrd performed at the Knebworth Festival along side fellow greats, Todd Rundgren's Utopia, 10cc and The Rolling Stones. Skynyrd were riding a creative and commercial high with their most recent album at the time "Gimme Back My Bullets," and their live shows were soaked in good old fashion rock and roll. On April 9th, Eagle Rock Entertainment will show proof of that with the release of Lynyrd Skynyrd's live performance from that Knebworth Festival in '76, as a CD + DVD set, a CD + Blu-ray set and a limited edition double-vinyl + DVD set.

The vinyl, audio only, portion of this set is great and mastered perfectly. The music has a deep, strong bass backdrop, which allows the piano, guitars and vocals to work together out front. Billy Powell's piano solo stands out early on during the opener "Working For MCA," while the three-headed guitar attack of Garry Rossington, Allen Collins and Steve Gains take over "Mr. Saturday Night Special" and "Whiskey Rock-A-Roller." Ronnie Van Zant's vocals are right up front in this new release, as he leads the band through the classics "Gimme Three Steps" and "Call Me The Breeze." Lynyrd Skynyrd turn the country staple "T For Texas" into an Allman Brothers Band-style southern rocker with the addition of some blues slide guitar, as the band finally loosen up for "Sweet Home Alabama." The highlight of the set in the nearly fourteen-minute version of "Freebird," which takes up the entire fourth side of this double-vinyl set. If the rumors are true that extra crowd noise was added to this release, it's not as noticeable on the audio portion than it is on the video portion.

The video on the DVD is clean and clear and feel like it has been remastered for this new edition of the Knebworth Festival. The classic filming style of concerts is a nice break from today's fast paced cut-aways that try and capture every moment on stage. There are time during the video of this performance where the musician performing the solo is not even on camera. The filtered audience feels like a distraction, since most of the shots of the audience are sitting down with only a couple people dancing. The wide shot of the 150,000-plus people is more impressive that zooming in on individuals. Skynyrd put on a top-notch performance, as drumming Artimus Pyle and police hat wearing bassist Leon Wilkeson work their ass off, laying down the foundation for the band to perform a strong, concise, hits filled show.

The Blu-ray also contains the bonus documentary "If I Leave Here Tomorrow: A Film About Lynyrd Skynyrd," which explores the band's history. In my opinion, vinyl is the only way that Lynyrd Skynyrd should be listened to and you will not be disappointed with this new live release. To find out more about Lynyrd Skynyrd "Live At Knebworth '76," please visit lynyrdskynyrd.com.