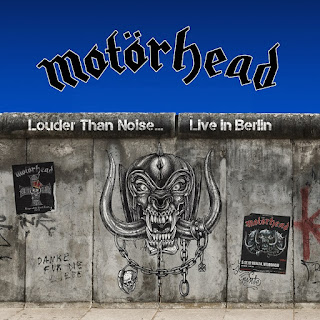 There's nothing better than a new Motorhead release! On April 23rd, Silver Lining Music/Motorhead Music are unleashing "Louder Than Noise...Live In Berlin." This show was recorded on the band's "Kings Of The Road Tour" and features their December 5, 2012 show at the Berlin Velodrom in Germany. It was one of the band's biggest shows in that country, performing for over 12,000 crazed fans and will be available as a CD and bonus DVD set and as a double-vinyl release.

This live performance shows Motorhead at the top of their game, as they have been performing as a trio for over a decade at this point. This 15-song set showcases many of Motorhead's most well-known, fan favorites like "Damage Case," "Stay Clean" and "Going To Brazil." The show kicks off with "I Know How To Die," as Lemmy's signature vocals lead the pack on this high-powered attack, driven by Phil Campbell guitar and Mikkey Dee's drumming. The sound on this new live release is outstanding, especially for sitting in the vaults for almost a decade. The rawness of the guitars on "Metropolis" feel like a buzzsaw ripping through your speakers, before Mikkey Dee speeds the tempo up for the incredible, mosh-pit igniting "Over The Top." Lemmy dives back into his catalog for a jamming version of "The Chase Is Better Than The Catch," along with the rarely performed "The One To Sing The Blues." The show finishes with the three-headed monster attack of "Killed By Death," the immortal anthem "Ace Of Spades" and an eight-minute epic closer "Overkill." To find out more about this new amazing live album "Louder Than Noise...Live In Berlin" arriving from Motorhead, please visit facebook.com/OfficialMotorhead.