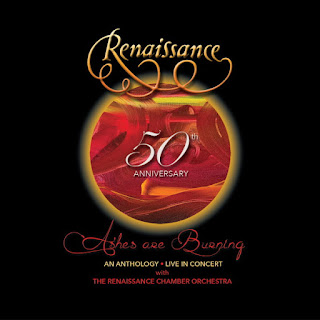 Symphonic, progressive rock legends Renaissance are releasing their 50th Anniversary concert, which took place back in October 2019, as a 2CD/DVD/Blu-ray set on April 30th through Symphonic Rock Recordings. Long-time Renaissance singer (since 1971) Annie Haslam feels honored to be a part of this band that has grown and evolved with each new member adding to the group's outstanding legacy. This new live set covers many of the Renaissance's classic songs, beginning with their 1973 single "Carpet In The Sun," as the band warm up, before heading into the seven-minute adventure of "Ocean Gypsy." The current line-up of Renaissance showcase their skills on the nearly ten-minute journey of "Running Hard," before finishing the first set with a very special guest, Renaissance co-founder Jim McCarty performing a duet with Annie on one of their earliest singles "Island," as the two still sound perfect together.

The second disc gets the energy flowing with the exciting flow "Day Of The Dreamer," which features the 10-piece Renaissance Chamber Orchestra, as they support each song beautifully. Anne's iconic vocals take center stage on the operatic tone of "Mystic And The Muse," before Renaissance close out the show with two amazingly, epic renditions of "A Song For All Seasons" and "Ashes Are Burning," which also features the return of Jim McCarty to celebrate 50 years of great symphonic rock music. To find out more about Renaissance's new live album titled "Ashes Are Burning: An Anthology Live In Concert," please visit store.renaissancetouring.com.