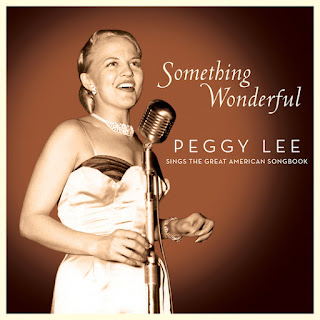 The immortal Peggy Lee was the subject of a new, updated 2020 PBS documentary titled "Fever: The Music Of Peggy Lee," which features loads of special guests paying tribute to the artist. To accompany that film, Omnivore Recordings will release a 40-track, two-disc set titled "Something Wonderful: Peggy Lee Sings The Great American Songbook." The songs are taken from Lee's radio program from 1951-1952, and many of the songs have never been issued before.

The first nine tracks are some of the most well-known songs in American history, like "Come Rain Or Come Shine," "That Old Black Magic" and "Jeepers Creepers." The set even begins with a duet between Peggy Lee and Johnny Mercer on "Ac-cent-tchu-ate The Positive." Next, Lee moves on to the timeless greats from the Rodgers & Hart & Hammerstein songbooks. The quality various slightly between certain groups of songs, but not enough to distract the listener from her wonderful renditions of "The Lady Is A Tramp" and "Something Wonderful," as Peggy Lee sings with style and grace. Most of the songs are less that two-minutes long, as you get these extended glimpses of her vocal talents on the Cole Porter classics "I've Got You Under My Skin" and "What Is This Thing Called Love?" Songwriter Matt Dennis joins Peggy Lee on her radio show for a duet medley that includes "We Belong Together," "Angel Eyes" and "Let's Get Away From It All."

The second disc begins with one of Peggy Lee's most famous songs "It's A Good Day," along with the fun, upbeat flair of "Manana." Hoagy Carmichael joins Lee on her radio show for a medley of his numbers, including the bluesy "Georgia On My Mind" and the gentle, quiet duet of "Two Sleepy People." The energy picks back up with Lee's performances of Frank Loesser's "Hoop Dee Doo," "Jingle Jangle Jingle" and "A Bushel And A Peck." The set closes with beautiful renditions of "Unforgettable," "Try A Little Tenderness" and "All Of Me." The accompanying 16-page booklet features new essay and liner notes by Joe Marchese (The Second Disc) along with a few great photos. To find out more about "Something Wonderful: Peggy Lee Sings The Great American Songbook," please visit omnivorerecordings.com.