"Best Case Scenario, You've Got The Mumps" With A Brand New Compilation From Omnivore Recordings 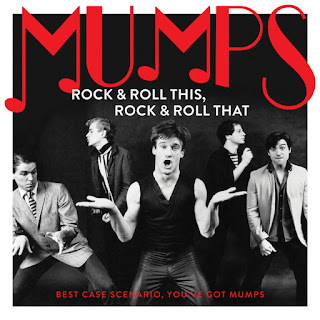 Arriving June 4th is a new compilation from the American punk band, The Mumps. The band was a staple of the classic New York City venues, CBGBs and Max's Kansas City, and they were lead by television star Lance Loud (An American Family). The new release titled "Rock & Roll This, Rock & Roll That, Best Case Scenario, You've Got The Mumps" features 23-tracks, including 2 previously unissued tracks when the band's early days as, Loud.

The songs in this new compilation were recorded between 1974-1979 and showcase the many different sides to the band, from the energetic punk roots of "Just Look, Don't Touch" to the sixties doo-wop melody of "Awkward Age." Some of the tracks that were recorded in the late-seventies like "Scream & Scream Again" and "Did You Get The Girl?" have the band's sound heading toward new wave punk, as they were looking to polish their edgy, raw sound. The rawness is still present with "We Ended Up" and "Muscleboys," as we find The Mumps flexing their garage rock sound that helped solidify an opening spot for a show with The Ramones in 1978.

The CD and digital versions of this compilation tack-on an additional nine bonus tracks that centers mostly around the band's earlier punk rock period with the underground, independent sounding "Teach Me" and "Stupid." They also show their British rock influences with the approach of "Dutch Boy" and "Photogenia." The compilation closes with the two early tracks from when the band was called Loud (before they became The Mumps), which features future Patti Smith Group drummer Jay Dee Daugherty. The songs "Cha Cha Cha" and "Back In The Street" have the building blocks for what would evolve into one of the premier American punk bands of the seventies. To find out more about The Mumps' release "Rock & Roll This, Rock & Roll That," please visit omnivorerecordings.com/mumps-rock-roll-this-rock-roll-that-best-case-scenario-youve-got-mumps.