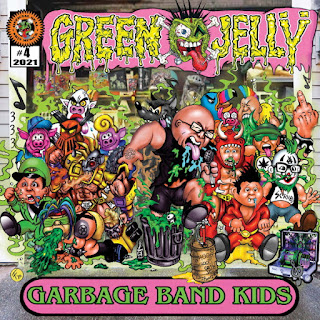 On June 11th from Cleopatra Records is the new release "Garbage Band Kids," from the iconic  punk/metal band Green Jelly. It will be the band's first release in over a decade and arrives on colored vinyl and CD with cover art and illustrations by one of the original creators of the Garbage Pail Kids trading card phenomenon. The album also features loads of special guests including the Trailer Park Boys, members of Fishbone and Suicidal Tendencies, and even a special message from "Weird Al" Yankovich. The seventeen song release begins with the gross subject of "Pukebox," as the band break-down the walls with their signature delivery of lyrics and the raw emotion of their music. You can't deny the energy and addiction of Green Jelly's music, as they sing about the oddest subjects like, Spongebob in "Silence Of The Squarepants" and the "Boy Who Cried Wolf" and even touch upon a Celtic-style sing-along with "Drinking Song." The mood turns dark with the thrash metal appeal of "Back Alley Dentist," before Green Jelly simplify their lyrics with the shout along chorus of "Hey Hey Hey." The CD version of this new album includes some bonus tracks, including a guest appearance by former WWE wrestler Hacksaw Jim Duggin on "Freetow Feet" and the condensed history of the band with "The Ballad Of Green Jelly." The album would not be complete, without a new version of their 1993 hit single "Three Little Pigs," which extends the story past the six-minute mark. To find out more about the latest release from Green Jelly titled "Garbage Band Kids," please visit cleorecs.com. 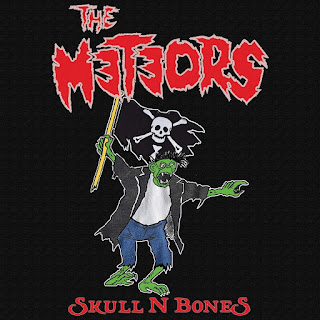 Psychobilly icons, The Meteors recently released "Skull N Bones," the first half of the their double album, which also will include the album "The Curse Of Blood N Bones." The new album kicks off with the classic, surf-like instrumental "Chasing Evil" and the more punk direction of "A Night In The Tombs." The band's signature rockabilly sound is present in the dark tale of the title track "Skull N Bones" and their cover of "Dateless Night," originally released by The Deltones in 1958. The Meteors simplify their sound with the nostalgic Halloween-themed "Zombie Noise," before wrapping up the first half of their double album with the swinging rhythm of "Twisted."

The energy continues to flow right into the swift-moving rockabilly backdrop of "All I Do" and "All I Can Do Is Cry." The descriptive lyrics of "Creature" paints the perfect image in your mind of the monster that may be singing this song to his next prey. The surf music style returns with the upbeat style of "Daughters Of The Deep," which may have worked better as an instrumental. The Meteors wrap up their new double-album with the country twang of "Alligator Man 2020," along with the album closer "(Ghost) Riders In The Sky," as they take this classic and make it their own with this evil sounding instrumental. To find out more about The Meteors and their latest releases "Skull N Bones" and "The Curse Of Blood N Bones," please visit cleorecs.com.