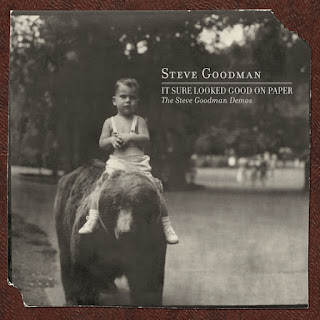 The songs written by Steve Goodman should be discussed along side some other greats like James Taylor, Jim Croce and Cat Stevens. As a solo artist, Steve Goodman never achieved the commercial success of his fellow peers, but his songs have blossomed under the direction of different artists, including Arlo Guthrie, Willie Nelson and Judy Collins just to name a few. Steve passed away from leukemia in 1984, but new recordings of his music continues to be discovered and released, including the latest album from Steve Goodman, "It Sure Looked Good On Paper." This new release arrives on May 14th through Omnivore Recordings and features twenty demo recordings from throughout Goodman's career. The songs have been cleaned-up and mastered by Grammy-winning engineer Michael Graves and Grammy-winning producer Cheryl Pawelski, and have never sounded better.

Beginning with the well-known, Grammy award-winning song "City Of New Orleans," you easily get lost in this new collection of solo acoustic and first take band tracks. It sounds as if Steve Goodman is singing these songs just to you, like the gentle touch of "Would You Like To Learn To Dance and the beautiful, simplified touch of "Jazzman." The sound of his band targeted seventies pop, as displayed in the songs "Hands On Time" and "Eight Ball Blues." This set will quickly remind you of not only how great a songwriter Steve Goodman was, but also how great of a singer he was as well. All of the tracks on this release are previously unreleased and some hidden gems are songs that Goodman wrote for soundtracks, including "Six Pack" and "Dead Men Don't Wear Plaid." This new release wraps up with Steve Goodman performing a slow-moving, graceful version of the traditional folk classic "The Water Is Wide." To find out more about this latest release from Steve Goodman titled "It Sure Looked Good On Paper," please visit omnivorerecordings.com/shop/it-sure-looked-good-on-paper. 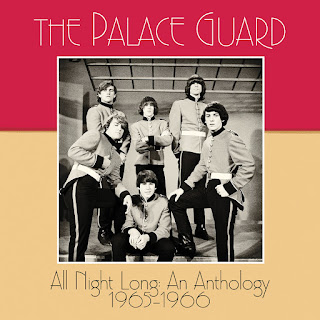 Also arriving soon from Omnivore Recordings is a brand new compilation of Emitt Rhodes' first band, The Palace Guard. The new release titled "All Night Long: An Anthology 1965-1967" features twelve tracks that the band recorded, before Rhodes departure from the band to form his second band, The Merry-Go-Round. The sound of The Palace Guard was the quintessential music coming from Los Angeles during the sixties. Songs like "All Night Long" and "Falling Sugar" will certainly transport you back to simpler times, as the band's harmonies looked to mirror that of their fellow Californians, The Beach Boys. The Palace Guard delivered a less polished sound on tracks like "Saturday's Child" and "Greed," which showcased a band still trying to fit in with what was popular at the time. The final two tracks ("Little People" and "Summertime Game") on this new compilation include the vocal contribution of Don Grady, who came from television fame as an actor on "My Three Sons." To find out more about "All Night Long: An Anthology 1965-1967" by The Palace Guard, please visit omnivorerecordings.com/shop/all-night-long.
Posted by JP's Music Blog