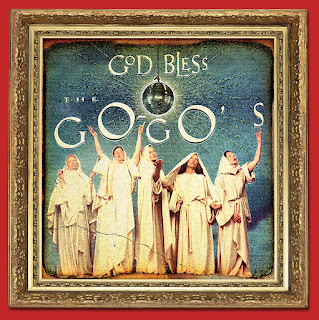 The iconic, all-female band, The Go-Go's are looking to head back out on the road later this year. They have a lot to celebrate, not only have they been nominated for the Rock And Roll Hall Of Fame, but they also have a new award-winning documentary and their latest is a new 20th anniversary edition of their 2001 reunion album "God Bless The Go-Go's." This new release arrive May14th through Eagle Records on CD, vinyl and in digital format. This is the first time that the original version of the album will appear with the original artwork on blue-colored vinyl and the CD version includes two bonus tracks, which were only available outside of the US.

The album "God Bless The Go-Go's" ended a seventeen year hiatus between albums and finds the band returning to their punk-like form on songs like "La La Land," "Unforgiven" and "Throw Me A Curve." This album also included some special guests, including Green Day's Billie Joe Armstrong and Foo Fighters Rami Jaffee. The Go-Go's seemed less concerned about writing a pop single, than making sure this new set of songs rocked, as they showcased that they could still deliver an edginess to their music, as in "Stuck In My Car" and "Kissing Asphalt." The two bonus tracks consist of the high-energy, classic Go-Go's sound of the U.K. only release "I Think I Need Sleep" and the harmony-fueled Japan only release "King Of Confusion." For more information on this new 20th anniversary release of "God Bless The Go-Go's," as well as upcoming tour dates, please visit gogos.com.