Billy Gibbons Shows Off His "Hardware" On His Latest Solo Album 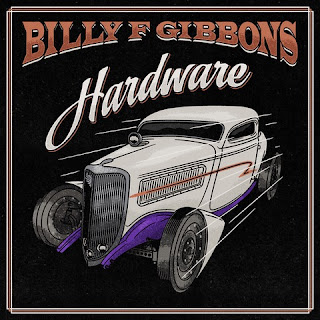 Earlier this month, blues guitarist/singer extraordinaire Billy Gibbons (ZZ Top) released his third solo album titled "Hardware." This follows his string of solo outings that began back in 2015 with "Perfectamundo" and then followed with 2018's "The Big Bad Blues." His "Hardware" album was released digitally, on CD and on a multitude of color vinyl back on June 4th through Concord Records and was produced by Gibbons, along with Matt Sorum (The Cult, Guns N Roses) and Mike Fiorentino.

The new twelve-track release features more up-tempo rockers than his last two solo releases, beginning with deep, strutting guitar groove and solid pounding drums of "My Lucky Card." Gibbons delivers a more signature ZZ Top-style vibe on "She's On Fire," but the only thing missing is his co-pilot Dusty Hill's iconic vocal stylings on the chorus in order to make this a modern classic blues rocker. Billy Gibbons keeps the energy flowing with the short, but sweet electrifying guitar work on "More, More, More" and "Shuffle, Step & Slide." Gibbons tries to capture that swampy, southern blues feel with "Spanish Fly, but lacks the grit and dirty playing that has become a staple to many of his past blues numbers.

The reverend Billy F. Gibbons his present on the rolling rocker "West Coast Junkie," as Gibbons' rough vocals fit this song's steady rhythm, as you are flying down the highway. Another song, "S-G-L-M-B-B-R" sounds like a second missed opportunity for a new ZZ Top album, as this has a more mainstream rock approach, than the bluesy backdrop that we have come to expect from Gibbons' solo releases. The album wraps up with his cover of the Texas Tornados' "Hey Baby, Que Paso," which is a fun sing-along with some stellar harmonica and guitar solos, along with the slow, storied blues of the album closer "Desert High."

Billy Gibbons is hitting the road this summer with ZZ Top. For a complete list of tour dates, please visit zztop.com/tour, and to find out more about Gibbons and his new solo album "Hardware," please visit billygibbons.com.