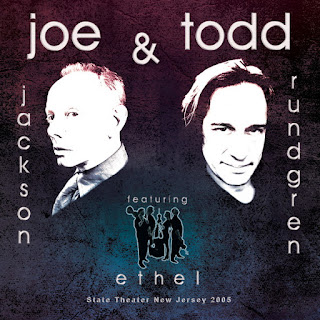 On June 18th (Today!), Cleopatra Records is releasing a new live album from Rock And Roll Hall Of Fame inductee Todd Rundgren titled "State Theatre New Jersey 2005." This is the first show to feature Todd's collaboration with Joe Jackson, along with the New York-based string quartet, Ethel. This new three-disc set features 31-songs spread across two CDs, along with a DVD of the show.

This live show finds these two artists performing disguised versions of some of their most well-known hits like "Hello It's Me," "Steppin' Out" and "Bang The Drum All Day." The show begins with the string-ensemble, Ethel introducing themselves with the instrumental opener "Nepomunk's Dances-Memory," as you can tell this is not going to be your typical rock and roll show. Their skills are on showcase during the two different stylings of the song "Sweet Hardwood," before Joe Jackson takes the stage for his stark, solo piano piece "Hometown" and a stripped-down version of his pop hit "Steppin' Out." Jackson brings the energy to "Take It Like A Man" and gets the crowd worked-up with his highest U.K. charting single "It's Different For Girls," along with the piano-based blues/rock of "Obvious Song." Joe Jackson brings on the first of two Beatles' covers of the evening, turning the song "Girl" into a piano ballad, before he wraps up his set with the audience-involved "Is She Really Going Out With Him."

Todd Rundgren begins his set with the swift, acoustic strumming of "Love Of The Common Man" and the quieter ballad "I Don't Want To Tie You Down." Todd really shines on the beautiful, stripped-down version of "Tiny Demons," as his vocals simply soar out of the speakers. Next, he moves to the piano for the gentle touch of "Compassion," before working up to "Hello It's Me" with a short spoken-word introduction. This song and "Bang The Drum All Day" are heard in a totally different context, which may not have the same punch as the originals, but are enjoyable in this new representation. Rundgren closes his set with a loose, acoustic version of his Utopia-penned song "The Wheel."

For the encore, Joe Jackson and Todd Rundgren each get their moment to front the Ethel string-quartet, first Joe with "Other Me," then Todd with "Pretending To Care." Then everyone joins in on George Harrison's well-known, bluesy sing-along "While My Guitar Gentle Weeps" and the epic closer "Black Maria," which finds Todd Rundgren plugin-in for this final track. To find out more about this unique night between Todd Rundgren and Joe Jackson at the "State Theater New Jersey 2005," please visit cleorecs.com/joe-jackson-todd-rundgren-state-theater-new-jersey-2005-2cd-dvd.