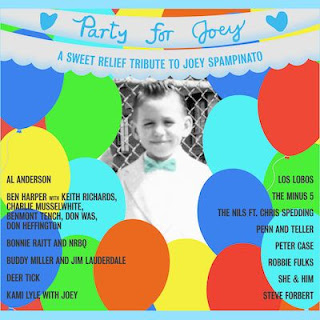 The band, NRBQ (New Rhythm and Blues Quartet) helped shape the landscape of American rock music in the late-sixties and early seventies. Their fanbase spreads far and wide including the likes of Bob Dylan, Paul McCartney, Keith Richards and Bonnie Raitt. One of NRBQ's founding members Joey Spampinato was diagnosed with cancer back in October 2015 and The Sweet Relief Musician Fund has helped with the financial burden that Joey and his family has encountered. To help with those mounting costs, True North Records is releasing a new compilation titled "Party For Joey, A Sweet Relief Tribute to Joey Spampinato" on June 25th. Friends and fans of Joey's work in NRBQ have come together to record covers of some of the band's work for this new album.

Long-time NRBQ member Al Anderson starts things off with a new rocking version of "You Can't Hide" (from NRBQ's self-titled debut album), which still carries that nostalgic tone with Al on lead vocals. The rhythm of "Every Boy, Every Girl" simply swings with the help of Los Lobos and Deer Tick deliver a smooth Americana-style to "That I Get Back Home." The blues of "Like A Locomotive" glows bright with the line-up of Ben Harper, Keith Richards, Charlie Musselwhite, Benmot Tench, Don Was and Don Huffington. She & Him (Zoey Deschanel and M Ward) turn "How Can I Make You Love Me" into a floating, psychedelic ballad, before The Minus 5 turn the energy back up with a raw, garage-rock version of "Don't She Look Good." The duo of Buddy Miller and Jim Launderdale capture the essence of NRBQ's country side perfectly with "How Will I Know," while Bonnie Raitt leads the current line-up of NRBQ through the struttin' blues of "Green Lights." This new compilation wraps up with a jazzy, lounge-type delivery of "Plenty Of Somethin'," along with a brand new recording from Joey Spampinato and his wife Kami Lyle titled "First Crush." To find out more about "Party For Joey, A Sweet Relief Tribute to Joey Spampinato," please visit truenorthrecords.com/sweet-relief.