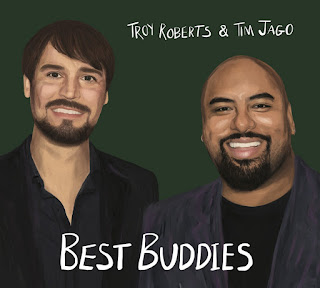 Musicians/friends Troy Roberts and Tim Jago have finally teamed up for a new album titled "Best Buddies." Each has found success on their own, Roberts has had multiple chart-topping albums and Grammy nominations, while Jago has worked with some of the genre's best, like Chick Corea, Bobby McFerrin and even Steve Miller. The duo's new nine-song release  begins with the exciting, up-temp, swinging melody of "Chythm Ranges" and the slower waltz of the title-track "Best Buddies." Both Troy and Tim get their moment to shine on the quick-moving solo-filled "Evil Eye," before finishing their new album off with the slow, smooth, emotion-fueled blues/jazz vibe of "Pho Tweny" and the final energetic blast of "Overlook." To find out more about this new collaboration between Troy Roberts and Tim Jago, please visit toyrobotmusic.com.

Back in May, jazz composer Adam Glaser released his sophomore solo effort titled "Excursions." It features fifteen tracks all written, recorded, produced and performed by Glaser. The album showcases many of Adam Glaser's musical inspirations, from the funky breaks of "Con Artist" and "A Little Bit Of Your Love," to the gentle piano jazz of "Lay Low" and the elegant strings of "It Snowed Last Night." He shows us his skills on the electric jazz of "Moonshine" and then flashes some synth-driven electronica with "Double Helix," before closing with the contemporary jazz of "Delivery." To find out more about Adam Glaser and his latest release "Excursions," please visit adamglaser.com.

Earlier this year, jazz outfit, Blue Muse, released their second full-length album titled "It Never Entered My Mind." This septet brings you back to the glory days of jazz with their new set of six cover songs, beginning with their classic take on Wayne Shorter's "One By One," which finds Blue Muse locked into the groove. They slowly move along the Rodgers and Hart ballad "It Never Entered My Mind," before delivering the exciting horns of Horace Silver's "Nutville" and the patriotic roll of Joe Sample's "Freedom Sound." The Blue Muse wrap up their latest release with another Wayne Shorter original, the swinging tempo of "Ping Pong," which keeps each member on their toes during this swift-moving number. To find out more about Blue Muse and their latest release "It Never Entered My Mind," please visit bluemusejazz.com.

Jazz pianist Dabin Ryu recently released her debut album simply titled "Wall." It features ten compositions written by Ryu, along with a steady cast of musicians to help with the instrumentation of the songs. The album begins with the graceful waltz of "The Light" and the swift rhythm "Temple Run," before reaching part one of "Wall," which features the vocals of Anthony Marsden. Part two of "Wall" has a more lively touch with a contemporary sound that keeps the energy flowing. Dabin Ryu finishes her new album with the quiet, elegant, solo piano piece "Stillborn," along with the swinging jazz of "Taxi Driver" and "We Will Meet Again." To find out more about Dabin Ryu and her latest release "Wall," please visit dabinryumusic.com.

We wrap things up with the third full-length release titled "Folk Songs Jazz Journeys" from storyteller Alex Martin. His new eleven-song release begins with the acoustic, Latin-flair of "Postal de Bata" and his quiet, bluesy version of "Wayfaring Stranger," featuring Maya Rogers on vocals. He keeps the worldly sounds flowing with island jazz of "Asa Branca" and "Triangulo," which are both highlighted by the sweet vocal work of Elin Melgarejo. Alex's skills on the guitar shine on the traditional Scottish tale of "I Once Loved A Lass," before wrapping up his new album with the exotic sounding jazz of "Laride" and "Estamos aqui para colaborar." To find out more about Alex Martin and his latest release "Folk Songs Jazz Journeys," please visit alexmartinmusic.com.