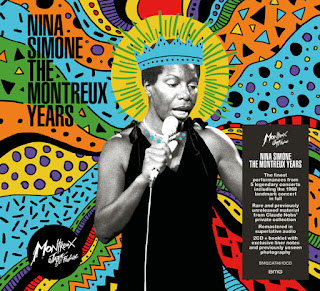 On Friday, June 25th, BMG will launch a new musical series titled "The Montreux Years," featuring performances from two great ladies of jazz and blues, Nina Simone and Etta James. This new collection will look back at some of the amazing performances that have be presented over the course of the festival's 55 year career. These two-CD or double-vinyl sets deliver some of the best live music around, beginning with Nina Simone's 29-song collection from her five different appearances at the Montreux Jazz Festival, including her entire show from 1968. It is great uncovering these treasures, like the nearly seven-minute "Backlash Blues," which includes a spoken word introduction, along with Simone's stellar vocals on the powerful message of "I Wish I Knew How It Would Feel To Be Free." The first disc also includes some special cover songs, like the stark rendition of Janis Ian's "Stars" and a lively, re-imagined version of Bob Marley's "No Woman No Cry." Nina Simone closes out the first disc with one of her most well-known tracks "My Baby Don't Care For Me," which is equally loved by the audience, as they clap along to song's rhythm.

The second disc of the set features Nina Simone's entire 1968 performance, which was her first appearance at the Montreux Jazz Festival. Once again she holds the audience in her hands, beginning with swinging backdrop of "Go To Hell," along with the graceful, gospel-like vibe of "When I Was A Young Girl." She also performs an amazing, haunting cover version of "Don't Let Me Be Misunderstood" and a spirited delivery of "House Of The Rising Sun." Nina Simone wraps up her show with a stellar ten-minute performance of "Ain't Got No, I Got Life" (from the Broadway musical "Hair"), along with the up-tempo rhythm of "Gin House Blues" and the emotional touch of "I Wish I Knew How It Would Feel To Be Free," which is just as important today as it was back in 1968. 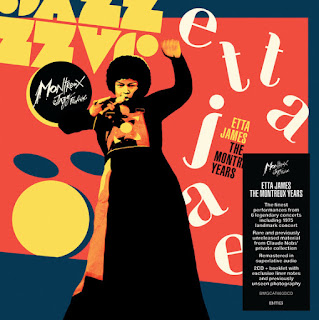 This first pairing of releases is perfect, as Etta James was also a powerful voice in jazz/blues music and her appearances at the Montreux Jazz Festival, which were always one of the highlights of each of the years she appeared. James' 21-song release is a mixture of five different appearances at the festival, beginning with the strength and blues of "Breakin' Up Somebody's Home." She also shows her graceful side on the touching ballad "A Lover Is Forever," but songs like "Tell Mama" and "Running And Hiding Blues" is where Etta James' vocals come alive and deliver the true strength of a powerful performance. The set also includes an eight-minute medley of her early hits "At Last," "Trust In Me" and "Sunday Kind Of Love," which kicks off a string of electrifying jams including "I Sing The Blues For You," "Respect Yourself" and "W-O-M-A-N." Her pure talents shine on the raw, emotional delivery of "I'd Rather Go Blind," before the set finishes with the funky backdrop of "Rock Me Baby" and the pure, sweet blues of T-Bone Walker's "Stormy Monday." To find out more about these first two releases of "The Montreux Years," please visit themontreuxyears.tmstor.es.
Posted by JP's Music Blog