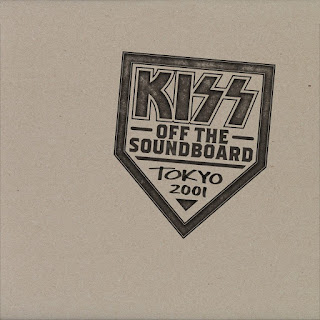 Arriving Friday, June 11th is the first release in a new series of live releases from the legendary rock band, KISS titled "Off The Soundboard: Tokyo 2001." This new release arrives in a number of different formats, including a 2-CD set, as well as a black triple-vinyl set and a limited edition clear vinyl with a bone-colored swirl from the KISS online store only. The packaging for this set is bare-bones, simple. The three LPs are housed in their own individual sleeves with the track-listing and credits printed on each sleeve that contains the similar brown, cardboard style as the cover. There is no pictures of the band, liner notes, other than who performed the show (Gene Simmons, Paul Stanley, Ace Frehley and Eric Singer) and the production credits. It's all about the music anyways, right? 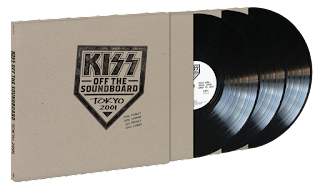 The black vinyl set is flat, quiet (with no surface noise) and is pretty thick (maybe 180-gram). The music from this performance (Tokyo, Japan March 13, 2001) is supposed to be from the soundboard with no added upgrades, unlike other KISS "Alive" albums. You will instantly notice how great Paul's vocals are on the energetic opener "Detroit Rock City." His stage banter hasn't changed much over the last twenty years, but that is why he is considered one of the greatest frontmen in rock history. Gene's vocals seem a little higher pitched on songs like "I Love It Loud" and "Calling Dr. Love," but his bass solo, which leads into "God Of Thunder" is one of the highlights of the show, which may give your speakers a workout. The secret weapon of this show is Ace Frehley's guitar style. It gives the songs a special nostalgic touch, even on the non-makeup era tunes like "Heaven's On Fire" and "Lick It Up." 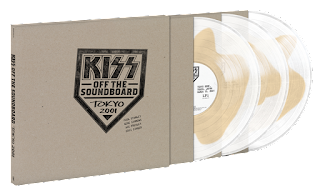 For me, side three (LP2, side 1) is where the real magic happens. Even though it only features two tracks ("Let Me Go, Rock & Roll" and "Shock Me"). It sounds as if the band is all warmed up by this point and ready to showoff their skills. KISS more than double the length of "Let Me Go, Rock & Roll" with some jamming, while "Shock Me" includes an amazing solo by Ace Frehley that brings you back to the early days of KISS' "Alive" and "Alive II." Eric Singer's drum solo at the end of "God Of Thunder" is also impressive, as he is still adjusting to his role as "The Catman" shortly after the January departure of Peter Criss. Other high points of this live set is the ten-minute version of "100,000 years" and one of the band's longtime encore staples "Black Diamond."

I hope that this on-going "Off The Soundboard" series features shows from throughout the band's entire career, including the non-make-up era and also shows featuring the original line-up of the band. Other than maybe some liner notes about the show, or a possible picture or two, this set concentrates strictly on the music, which is all you need from KISS. To find out more about this new release "Off The Soundboard: Tokyo 2001," please visit shopkissonline.com/off-the-soundboard-tokyo-2001.