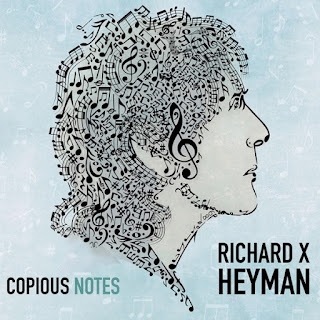 Veteran rock/pop guitarist Richard X. Heyman used his time during the 2020 pandemic shutdown to create new music, which is now being released in the form of a new album titled "Copious Notes." Heyman took a page out of Paul McCartney's book, by performing and recording the album almost entirely solo, with help from his wife Nancy who engineered and played bass on the album. The new release consists of a dozen tracks, beginning with the addictive pop melody of "Nearly There" and the upbeat rocker "Choices We Make." The album is balanced nicely by the gentle, graceful ballads "Cedarbrook Park" and "But Out Love," which truly shines with Richard's amazing songwriting talents. He keeps the tempo swinging with the undeniable pop flavor of "Return To You" and the more nostalgic tone of the album closer "The Greater Good." To find out more about Richard X. Heyman and his latest release "Copious Notes," please visit richardxheyman.com.

U.K. bandleader Emma-Jean Thakray is preparing the release of her debut album "Yellow" on July 2nd through her own label, Warp Records. It features fourteen tracks that blur the lines of funk and jazz fusion, beginning with the psychedelic clash of "Mercury," which starts things off with a spaced out, psychedelic instrumental. The seventies-style funk is extremely present on the flashback of "Say Something," while "About This" is the perfect touch of high quality jazz. The gospel-like harmonies of "Third Eye," place you right in the church of funk and "Sun" is a smooth R&B track that carries that spiritual message of a higher purpose. The album wraps up with the bright, uplifting tones of the title track "Yellow" and the closing jazz fusion art piece "Mercury In Retrograde." To find out more about Emma-Jean Thakray and the band's latest release "Yellow," please visit emmajeanthackray.com.

Next, we travel to the People's Republic of China for the latest release from Round Eye titled "Culture Shock Treatment." Their new fifteen-track release will get your adrenaline, pumping, right from the opening notes of the title track "Culture Shock Treatment." The band's intense, punk style feels even more rebellious on the short, hard-hitting delivery of "Magaman," while "The Foreigner" carries a classic U.K. punk energy that inspired Round Eye earlier in their career. The full force of the band is heard on the rawness of "Armadillo Man," before switching gears to the fifties R&B flow of "Red Crimes" and the ska-like delivery of "Pieces." Round Eye finish with the new wave style of "Uomo Moderno" and their dark oddity cover of "Endless Sleep." To find out more about Round Eye and their latest release "Culture Shock Treatment," please visit facebook.com/roundeyeband.

Avant-guard instrumental band, Lantera recently released their seventh studio album titled "Hidden Drive." The ten-song release begins with the graceful flow of "Aix," while the title-track "Hidden Drive" brings in some energy to the song steady pace. The swirling melody of "Cupola" and the country vibe of "Chagrin Boulevard" showcases the diversity in the band's musical style. The upbeat, pop tempo of "Aqueduct" feels as if it is need of some lyrics to make it more memorable, while "Maine 262" sounds like a latter-day Pink Floyd soundscape. Lantera closes out their new album with the beautiful strumming of "Nice" and the elegant, soaring touch of "Flag." To find out more about Lantera and their latest release "Hidden Drive," please visit facebook.com/lanternaband.

Last, but not least, we have the final recordings of 101-year old fiddler Willie Durisseau (who passed away in 2019). This new two-song EP titled "Creole House Dance" was captured on a Zoom recorder by Louis Michot (Lost Bayou Ramblers) at Willie's home back in the spring of 2019. These songs give us a look back to the roots of Louisana French music, beginning with the loose, shuffle of "Blues a Durisseau," which also included some banter between Willie and Louis. The other track "Willie's Zydeco" is a sweet southern serenade by one of the last original pioneers of Louisana folk music. To find out more about Willie Durisseau and the "Creole House Dance" release, please visit williedurisseau.bandcamp.com.