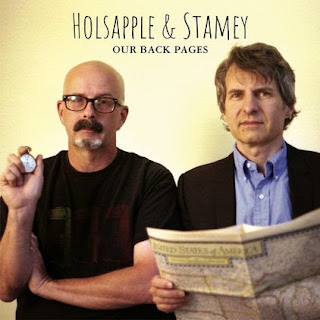 Back in the late seventies & early eighties, music artists Peter Holsapple and Chris Stamey joined together to form the band, The dB's. The band found mild success with the underground, alternative scene, before disbanding in 1988. The dB's have since reunited and Peter Holsapple and Chris Stamey have teamed up to re-record some of their favorite songs from The dB's as acoustic pieces. This new album titled "Our Back Pages" was released on vinyl for Record Store Day on June 12 and will be released on CD and digital formats on June 18th through Omnivore Recordings.

The album features eleven tracks, along with a pair of bonus songs, beginning with the wonderful harmonies of "Today Could Be The Day" from their 1987 album "The Sound Of Music." The music turns softer on the ballad "From A Window To A Screen," while "Black And White" has a classic, acoustic folk appeal with a bit of energy added for good measure. Holsapple and Stamey's voice mesh together beautifully on "Dynamite" and "Happenstance," as this duo follows the path of Simon & Garfunkel and The Everly Brothers. This new compilation features the never before released original dB's track, "Depth Of Field," which leaves the pop aspects behind to deliver a more meaningful work of art, before closing with the slow blues of "Nothing Is Wrong," which just motors along its steady track. The two bonus tracks "Darby Hall" and "In Spain" are two of the quieter numbers on this release, which have a stark, almost demo like feel. To find out more about this new release "Our Back Pages" from Peter Holsapple and Chris Stamey, please visit omnivorerecordings.com/shop/our-back-pages.