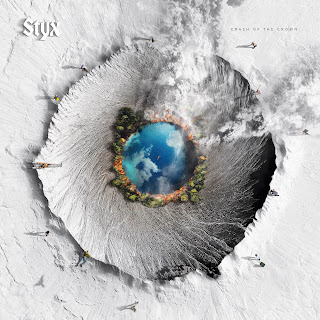 The legendary rock band, Styx are preparing to release their 17th studio album titled "Crash Of The Crown" on June 18th through the band's label, Alpha Dog 2T in association with UMe. The album will be released on CD, as well as on limited edition clear vinyl and on black vinyl. Styx also released a special vinyl EP for Record Store Day titled "The Same Stardust" which includes two songs from the new album and also five rare live performances that the band performed during a live stream they called "Styx Fix."

This new 15-track, full-length release is their first set of new music in four years and begins with the sound of their iconic harmonies on the rocking opener "The Fight Of Our Lives." The energy and aggression is taken up a notch on the edginess of "A Monster," before letting up on the gas pedal for the more progressive nature of "Reveries," which flows into soft beginning of "Hold Back The Darkness," highlighted by an electrifying guitar solo. Styx bring back their nostalgic seventies sound on the acoustic-based "Our Wonderful Lives" and "Sound The Alarm," before finishing their new album with the return of their harder rock sound with the intense delivery of "To Those" and the floating harmonies of "Stream," along with one final guitar solo sendoff.

Styx are also heading back on the road for a multi-date tour with Collective Soul, before heading back to Las Vegas for a three-night engagement at The Venetian Theatre. For a complete list of shows and to find out more about their new album "Crash Of The Crown," please visit styxworld.com.