Wanderlust Return After Two Decades With "All A View" 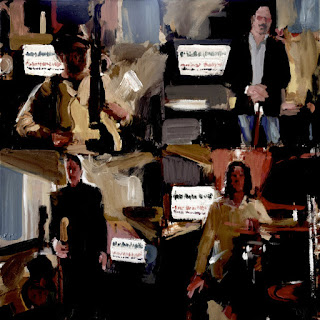 The story of the nineties band, Wanderlust may sound tragic, like so many other bands during the nineties. As record sales in the industry were soaring to record-breaking heights, every label was looking to sign the next golden ticket band, like a Nirvana or a Pearl Jam. The band Wanderlust formed in 1993, hit the studio in 1994, released their debut album in 1995 and opened for The Who in 1996. Critics loved the album, but the record buying public did very little to notice the band among a sea of new music that flooded the market. Wanderlust was eventually dropped from their label and disbanded before the close of the decade. The members of the band went on to find success on their own, front man Scot Sax ending up working with Tim McGraw, Faith Hill and opened for Robert Plant & Allison Kraus on their tour. Rob Bonfiglio teamed up with Brian Wilson and The Beach Boys and worked alongside Wilson Phillips. Both Jim Cavanaugh and Mark Getten went on to form other bands, but the work of Wanderlust was never completed, until now.

Nearly 25 years after their debut album, Wanderlust have come together to properly complete their follow-up album "All A View." The album will be released on July 2nd, on CD, vinyl and on digital format. Now with over two decades of experience, the band's new ten song release bridges the gap between the nineties and today. The album begins with the alternative, psychedelic pop of the title track "All A View," which shows glimpses of their early, edgy rock phase. Wanderlust quickly move along to their pop elements on the gentler melody of "Something Happens," as their maturity begins to shine along with the songs "Trick Of The Light" and "Critical Mind." Their inspirations and experiences are definitely present on nearly each and every track of this new album. The band finish with the quiet, folk-strumming of "Bored And Blue," next to the undeniably addictive delivery of "Inspiration." To find out more about Wanderlust and their latest release "All A View," please visit facebook.com/wanderlustfans.