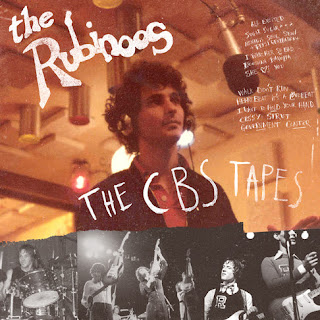 Arriving June 25th on Yep Roc Records is a rare glimpse into the early days of the late-seventies/early-eighties power pop band, The Rubinoos. This new release titled "The CBS Tapes," features The Rubinoos in the studio, feeling their way through a mix of eleven original and cover songs, prior to the recording of their self-titled debut album in 1976. The Rubinoos ended up recording three studio albums between 1976-1983, before disbanding in 1985, but they would eventually regroup in 1998, as the band still continues to record and tour to this day.

This new release begins with the original track "All Excited," which showcases the fun, youthful energy that The Rubinoos have to spare, as they exuberate that energy all over this addictive, alternative-pop opener. Next, they turn The Archies' "Sugar, Sugar" into a loose jam, which fits the band's style perfectly. The Rubinoos get down and funky with their cover of King Curtis' "Memphis Soul," before delivering the punk goods on another one of their original tracks "I Want Her So Band." They also show their much love for The Beatles with their own spot-on versions of "She Loves You" and "I Want To Hold Your Hand," as The Rubinoos match the harmonies perfectly. The album closes with the soulful groove of The Meters' "Cissy Strut" and a rough recording of the Modern Lovers' "Government Center," which matches The Rubinoos' rebellious power pop sound. To find out more about The Rubinoos, visit rubinoos.com and to order their new release "The CBS Tapes," please visit yeproc.11spot.com/the-rubinoos-the-cbs-tapes.html.