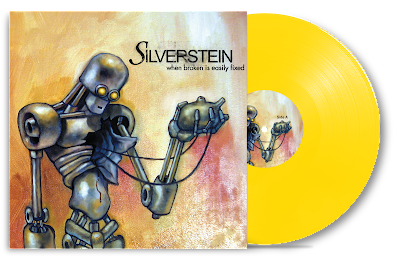 Canadian rock band, Silverstein are preparing a reissue of the 2003 debut album "When Broken Is Easily Fixed," in order to celebrate the band's 20th anniversary. They are also heading out on the road this fall for an extensive North American tour. The band signed to Victory Records in 2002, following the release of a couple EPs in 2000 and 2002. Silverstein entered the studio in early 2003 to record their full-length debut album, which was released on May 20th of that year and laid the groundwork for the next 20 years.

The album "When Broken Is Easily Fixed" features a melodic, hard rock approach with elements of punk and hardcore metal thrown in, which gives Silverstein's debut that raw, youthful sound. The opener "Smashed Into Pieces" hits you right in the face with its aggressive vocals screams and power chords that feels like a jolt of fresh energy. The band capture the balance of emotion and excitement perfectly on "Giving Up," while "Last Days Of Summer" shows how Silverstein were able to blur the line between hardcore metal and melodic alternative rock. The rawness of "Bleeds No More," along with the title track "When Broken Is Easily Fixed" displays the band's willingness to be noticed and taken seriously as rock artists, as their sound early on set the foundation for what as to come for Silverstein.

A new limited edition vinyl of Silverstein's debut album will be released on July 9th through Craft Recordings, find more info on that release here craftrecordings.com. For a complete list of upcoming tour dates and to find out about the band's latest projects, please visit silversteinmusic.com.