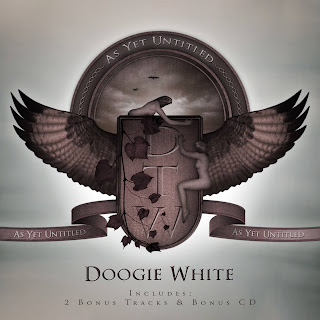 Scottish rock vocalist Doogie White has had an illustrious career as the former lead singer of band's like Richie Blackmore's Rainbow and Yngwie Malmsteen's Rising Force. He currently sings lead for the classic heavy metal band Alcatrazz and La Paz. Back in 2011, Doogie White released his one (and only) solo album titled "As Yet Untitled," which featured ten tracks. In honor of the tenth anniversary of that album, Doogie White is reissuing the album as a 2-CD set along with an entire second disc of previously unreleased collaborations.

The "As Yet Untitled" album was originally recorded after his departure from Yngwie Malmsteen, as Doogie White was weighing his options for his next career move. The songs that appeared on the album still carry that hard rock edge that centers around Doogie's timeless vocals. I mean songs like "Time Machine," "Lonely" and "Catz Got Your Tongue" are full-on rockers, led by the amazing vocals of Doogie White, along with a cast of backing artists that are some of the best in the business, giving their all in every song. This new 10th anniversary release of the album features two bonus tracks that were left off the original album, but definitely deserve a spot on the album now. The first bonus track is "Dishing The Dirt," which even Doogie said "should have been on the album," but was sacrificed due to Whitesnake having a similar song with the same style and titled released around that time. The second bonus track is the power ballad "Small Town Saturday Night," which was written with Alex Dickson, but seemed out of place on this heavier rock record, according to Doogie White.

If two bonus tracks are not enough, their is an entire second disc of previously unreleased tracks that Doogie White has recorded over the years. The tracks on this disc include some outstanding covers of classics by Iron Maiden, Whitesnake and The Rolling Stones. Some of the stand-out tracks include Doogie's spot on delivery of one of the harder Iron Maiden songs to sing "The Clairvoyant," along with a raw version of Whitesnake's "Judgement Day." Doogie seems to be having fun paying tribute to his idols, The Rolling Stones with his run through "Let's Spend The Night Together" (which sounds more like a cover of the David Bowie version of the song). The bonus disc finishes with a perfect match-up of Doogie White performing the Nazareth classic "Love Hurts" and the nostalgic, swinging rock and roll of "Twistin' The Night Away." Doogie puts his stamp on every song his sings, as displayed on each and every track on this bonus disc. To find out more about this new 10th anniversary release of Doogie White's "As Yet Untitled" album, please visit thestoreformusic.com.