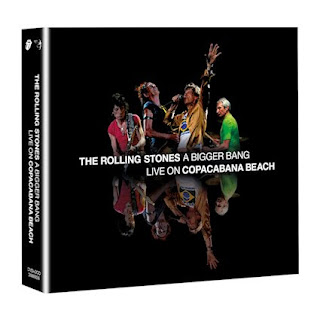 On July 9th, Mercury Studios have released a new 2CD/Blu-ray/DVD set titled "The Rolling Stones - A Bigger Bang: Live On Copacabana Beach." A deluxe 3 LP color-vinyl version will be released in August. The tour that supported The Rolling Stones album "A Bigger Bang" lasted for two years, hitting over twenty different countries and is currently ranked second all-time of the highest grossing tours of all-time. The tour was also well-documented with a number of different videos previously released, including Martin Scorsese's documentary "Shine A Light" and the Best Buy exclusive 4-DVD set "The Biggest Bang," which included this show. This new release was remixed, remastered and features four songs that were not on the original video release ("Tumbling Dice," "Oh No, Not Your Again," "This Place Is Empty" and "Sympathy For The Devil") and will be available for the first time on CD, vinyl and digitally.

The opening helicopter shot of the crowd is enormous, as it seems like over 100,000 fans are in attendance. Plus, the concert being right on the beach allows boaters to also take in this classic show from The Rolling Stones. The video is your typical presentation, as it interweaves close-ups of the band and scans of the crowd. The stage is quite massive with plenty of room for the band to move around and for the cameramen to capture every angle possible. Highlights of the set are the two blues numbers "Midnight Rambler" with Mick Jagger wailing away on the harmonica and their cover of the Ray Charles classic "Night Time Is The Right Time." The audio version alone is still exuberant with energy, but without the video portion to accompany the music, you are only getting half of the experience. This performance by The Rolling Stones ranks up their with some of their best (along with the moving stage and all) and may even be considered one of the best shows of their late-career resurgence.

The deluxe release, also includes a previously unreleased show from November 2005 in Salt Lake City, Utah, performed only a few months before this historic Brazilian show and includes some songs not performed on the Copacabana Beach, like "She's So Cold" and "Infamy." Also included with the deluxe edition is a 40-page, full color book, which houses the discs from the deluxe set. To find out more about "The Rolling Stones - A Bigger Bang: Live On Copacabana Beach" deluxe release, please visit therollingstonesshop.com. 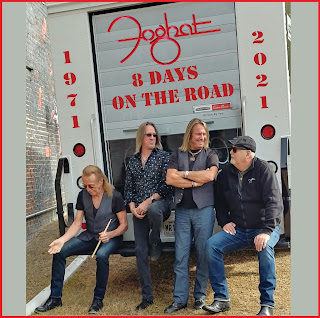 Classic rock artists, Foghat have also recently released a new live album titled "8 Days On The Road." It was recorded November 17, 2019 at Darryl's House Club in Pawling, NY, just four months before COVID-19 shut down all live music around the world for 2020. This new fourteen-song set is finds one of the original hard rock bands of the seventies, performing some of their biggest hits in this small, intimate club, which just makes the music explode through the speakers. The show starts off with a pair of traveling songs, "Drivin' Wheel" and "Road Fever," as the band's performance is filled with high-energy and blazing guitar solos. Foghat dive deep into the blues with their cover of the Elmore James classic "It Hurts Me Too" and adds a little extra punch to Al Green's testimonial anthem "Take Me To The River." The real gems of this set is their most well-know rockers "Fool For The City," an extended nine-minute jam of "I Just Want To Make Love To You" and of course one of the biggest rock anthems of all time "Slow Ride," which pushes things to the max with Foghat's excellent live performance of the song. This new live album "8 Days On The Road" kicks off the band's 50th anniversary celebration, which finds them hitting the road this summer. For a complete list of shows and to find out more about Foghat's latest release, please visit foghat.com.
Posted by JP's Music Blog