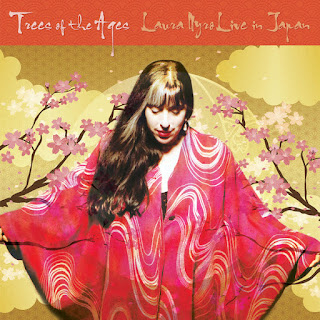 On July 16th, Omnivore Recordings will release the original Japan-only live album titled "Tree Of Ages: Live In Japan" from the late, great singer, songwriter Laura Nyro. Nyro is a member of the Rock And Roll Hall Of Fame and the Songwriters Hall Of Fame with a catalog that includes hit songs for artists like Barbara Streisand, Three Dog Night, 5th Dimension and Blood, Sweat & Tears. This "Live In Japan" album was originally issued back in 2003 and was recorded at the Kintetsu Hall in Osaka, Japan in February 1994.

The album features sixteen songs, which range from Laura's owned penned hits to covers of some of her influences, including the two opening tracks "Dedicated To The One I Love" (made famous by The Mamas & The Papas) and "Ooh Baby Baby" (by Smokey Robinson). The show sounds exceptional with just Laura, a piano and a small harmony trio, as the music and performance sound so intimate. Her live show was made up mostly of songs from her latest release at the time, her 1993 album "Walk The Dog And Light The Light." The songs "Louise's Church" and "Like A Flame (The Animal Rights Song)" sound as if Laura Nyro is singing right to you, as her pure talents shine on this release. She also demonstrates her songwriting talents with her versions of the hit songs "And When I Die" and "Save The Country," which have as much meaning now as when she wrote them back in the sixties. The audience gets into "Wedding Bell Blues," clapping out the rhythm, as Laura and the harmony group deliver a timeless version of the song. The album finishes with some more cover songs ("Walk On By," "Let It Be Me" and "Wind"), along with one final flashback of "My Innocence/Sophia" and the beautiful ballad "Art Of Love." To find out more about this this new release of Laura Nyro's live album "Tree Of Ages: Live In Japan," please visit omnivorerecordings.com.