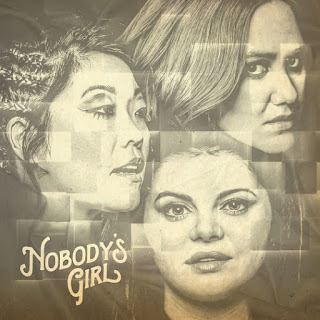 Arriving July 30th from Lucky Hound Music is the self-titled full-length debut release from the Austin-based singer-songwriter trio, Nobody's Girl. Members BettySoo, Rebecca Loebe and Grace Pettis have established a following each on their own, but have united their voices for one of the best Americana/country albums of 2021. The trio got together about three years ago to just record some songs for an EP titled "Waterline," which also took them out on the road for most of 2019. They re-entered the studio back in September of that year and wrote and recorded a full album's worth of material in nearly record time. The album's release was delayed slightly due to the pandemic, but now features some of today's best pop/country harmonies.

The album begins with "Kansas," which has a pure modern country sound, based on the story of the "Wizard Of Oz," as you instantly notice the chemistry between the three singers. Nobody's Girl keep the energy going with the steady rhythm of "Rescued" and then take a step toward mainstream pop with the harmonies of "Tiger," before reaching the wonderful vocals and songwriting of "Promised Land." They turn the volume up to ten on the country rocker "What'll I Do" and deliver an edgier sound with "Waterline," before slowing down for the honest, simple touch of Carole King's "So Far Away." Nobody's Girl finish their new album with the graceful touch of "The Morning After," as the music just floats on by, along with the quiet, folk approach of "Lark." To find out more about Nobody's Girl and their new self-titled release, please visit wearenobodysgirl.com.