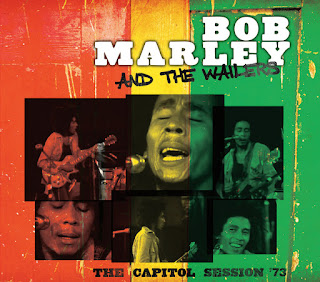 Arriving September 3rd from Tuff Gong and Mercury Studios is new rare glimpse at Bob Marley and The Wailers during their rare 1973 studio session in Hollywood, CA. The new release titled "Bob Marley And The Wailers: The Capitol Session '73" will arrive in a number of different formats, including a CD/DVD set, standalone CD, multi-colored vinyl and digitally. The backstory of this unique release dates back over 20 years, when all of the original footage from these sessions with Marley and the band had been lost or destroyed. Then, a freelance researcher discovered a few frames of the filmed footage and throughout the past two decades enough footage from these sessions were discovered to create this unique film.

After a few shows with Bruce Springsteen and Sly And The Family Stone, Bob Marley and The Wailers made their way to Hollywood to record a closed door session with producer Danny Cordell. The film was mixed "on the fly" for a possible future release, but the band was gaining so much success so quickly that there was a big demand for new music and live shows. Now, nearly fifty years later with get to see them in top form, in the studio, performing live and loose during this hour-long session.

The film footage has been painstakingly restored and looks great, considering its history. Bob Marley and The Wailers look and sound very professional, sticking to a certain set list, wasting no time in-between songs. Peter Tosh takes the lead on some of the tracks like "You Can't Blame The Youth" and "Stop That Train," with his stoic demeanor. Without an audience present, its a great insight to see the band play off each others energy, keeping the music loose, but I wish the band would jam out to some of the songs, but they seemed like all business when in the studio. It's also nice watching a video that doesn't cut to a different camera angle every two seconds, instead letting the feeling of the music control the filming, instead of the other way around. Hearing alternate version of some of Bob Marley and The Wailers' biggest hits like "Stir It Up" and "Get Up Stand Up" is a blessing, as they all pour all their emotions into this performance. To find out more about the newly released "Bob Marley And The Wailers: The Capitol Session '73," please visit shop.bobmarley.com.