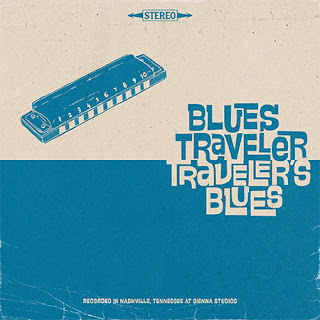 During the nineties, alternative rock band Blues Traveler dominated the airwaves with their hit singles "Run Around" and "Hook" from their multi-platinum selling album "four." Their last studio effort "Hurry Up & Hang Around," celebrated the band's 30th anniversary, while their brand new album "Traveler's Blues" find the band diving back into their blues roots. They rework some Great American Songbook classics like "You Got Me Runnin'," "Crazy" and "Sittin' On Top Of The World." Blues Traveler also invited some special guests along to help out, including Warren Haynes, Rita Wilson and John Scofield just to name a few.

The new eleven track release begins with the swinging rhythm of "Funky Bitch," which feels right at home in the hands of Blues Traveler. Singer Crystal Bowersox joins John Popper on the vocal duet of "You Got Me Runnin'," but the star on this song is pianist/keyboardist Ben Wilson with his stellar solo. Rising blues guitarist Kingfish Ingram makes his presence known on the slow blues of "Ball And Chain," while the more legendary guitarist Warren Haynes pours his heart and soul into his collaboration with Blues Traveler on the Mississippi Sheiks classic "Sittin' On Top Of The World." The album wraps up with Mickey Raphael lending his harmonica skills to The Doors' "Roadhouse Blues," before closing with the the nostalgic tone of "Trouble In Mind" with support from the great Keb' Mo'. Blues Traveler are currently on the road, supporting their new blues album. For a complete list of tour dates and to find out more about their new release "Traveler's Blues," please visit bluestraveler.com.

Blues-rock guitarist Chantel McGregor recently released the second volume of her latest two-album set titled "The Shed Sessions." Volume 1 was released back in July and features Chantel's acoustic side with the gentle touch of songs like James Taylor's "Fire And Rain," along with Neil Young's "Harvest Moon." She delivers a truthful, emotional version of Blind Faith's "Can't Find My Way Home," before delivering a more blues-oriented groove with Jimi Hendrix's "Voodoo Chile." Chantel finishes off her acoustic album with a stark, honest rendition of Metallica's "Nothing Else Matters."

The electric side of "The Shed Sessions" is featured in volume 2, which begins with some quieter reworkings of tunes like Radiohead's "Creep" and Jewel's "Foolish Games." Chantel finally plugs in and turns the volume up for the emotion-fueled guitar solo of "Walk On Land" and then allows her angelic vocals to float above the buzz of Alanis Morissette's  "Uninvited." She closes with the powerful guitar-work of "April" and the seven-minute blues of "The Raven That Refused To Sing." To find out more about Chantel McGregor and his latest releases "The Shed Sessions," please visit chantelmcgregor.com.