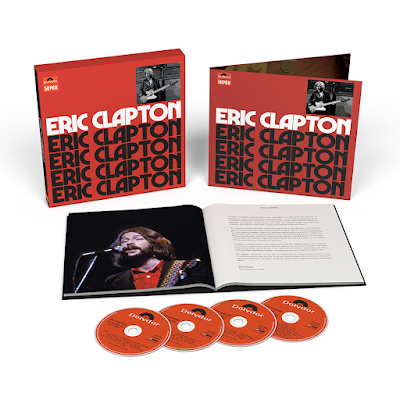 On August 20th, UMe/Polydor will unveil the "Anniversary Deluxe Edition" of Eric Clapton's debut solo album, which was originally released in August 1970. After the success of his former bands like The Yardbirds, Cream and Blind Faith, Clapton decided that it was time to put together his own band of all-stars and create his first solo album. This new deluxe edition of the "Eric Clapton" album features three different mixes of the album spread across three-discs, with an additional fourth disc of outtakes and alternate versions.

The original album mix by Tom Dowd is presented on the first disc and will also be available on standard black vinyl in its latest remastered form. The album featured the hit singles "After Midnight," "Blues Power" and "Let It Rain," which turned Eric Clapton into a pop star. The second disc in this set features Clapton's own mix of the album, which was done in 1970 and includes some never before released versions of eight of the album's eleven tracks. As you listen, you will notice subtle differences, like the piano being more prominent on the opening track "Slunky" and adding a longer introduction and louder guitar to "Blues Power." Clapton even turns "I've Told You For The Last Time" into a more southern, gospel-like track, than the country feel of the original.

There is also a third mix of the album done by Clapton's former bandmate Delaney Bramlett, which was previously released as part of the 2005 deluxe edition release, which has since gone out of print. The Bramlett mix re-arranges the order of the songs, moving the acoustic strumming "Easy Now" up to the third track and putting the blues giants "After Midnight" and "Blues Power" right in the center of the track-listing. The gospel highlight "Lonesome And A Long Way From Home" is also moved to the rear of the album, adding a bit more energy to the closing tracks "I Don't Know Why" and "Let It Rain."

The fourth disc of the set includes eight session outtakes, alternate mixes and B-sides. Many of these tracks have also been previously released on the 2005 deluxe edition, but are included once again in this box, making this the ultimate complete set of Eric Clapton's debut album. One of the previously unreleased tracks is an alternate mix of the Delaney & Bonnie & Friends song "Comin' Home," which features some amazing guitar work by Clapton. The B-side to that single "Groupie (Superstar)" is also featured on this disc. The highlight of the disc is the ten-minute blues jam "Blues In A," which is just pure magic in the studio, as all of the musicians are just simply following the master at the top of his game. To find out more about this new "Anniversary Deluxe Edition" of Eric Clapton's debut solo album, please visit whereseric.com.