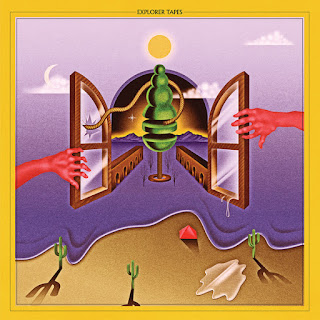 After waiting nearly six years, Omnivore Recordings is ready to release the long-awaited debut album from Texas country-pop band, Explorer Tapes. The new self-titled album was produced by Mike Elizondo (Carrie Underwood, 50 Cent, Fiona Apple) and features fourteen tracks (12 from the original planned album and 2 bonus tracks). The story behind the album plays out like a movie, with two friends (Max Townsley and Drew Erickson) wanting to start a band. They move to LA, sell-out the clubs, get signed to a major label, have a hot producer to work with and even get their song recorded by a huge country artist. Everything is in place for the Explorer Tapes to hit it big, when the label shifts interests and the album sits in limbo for six years, until Omnivore Recordings, in conjunction with Warner Records, resurrects it to be released on August 13th.

Now, lets get to the music. The album begins with the steady rhythm of "All Depends On You," which features an undeniable chorus that is just demanding to become a hit single. Their song "Texas Time" may sound slightly familiar, because it was recorded by Keith Urban for his 2018 album "Graffiti U." The song has a modern, pop melody that still harks back to its country roots with a beat that is sure to move you. Explorer Tapes new album are filled with great songs, like the classic country vibe of "A Good Friend Is Hard To Find" and the smooth sounds of "Change Looks Good On You," which finds the band crossing the line into R&B territory. They find their way into you heart with the beautiful ballad "Everybody's Crazy" and the stripped-down acoustics of "More Than A Song Can Say," before closing with the stellar harmonies and summer-time feel of "Wouldn't Change A Thing."

The two bonus tracks are as good as anything else on the album, with the low-key, poetic touch of "Sunset Strip," which describes their early days in LA, along with the more pop-oriented beats of "Still Love Lindsay." To find out more about the new Explorer Tapes release, please visit omnivorerecordings.com.