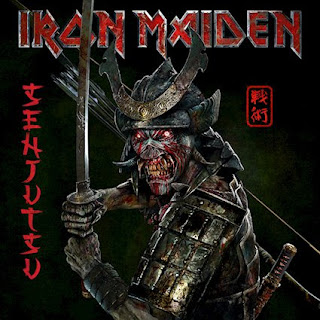 The era of "Senjutsu" is about to begin this Friday, September 3rd for heavy metal icons, Iron Maiden. The release of their 17th studio album signals a new chapter in the band's illustrious history. The new ten-song set was produced once again by Kevin Shirley, with co-producing credits from bassist Steve Harris. It has been six years since their last studio album "Book Of Souls" and the stoppage of touring due to the global pandemic allowed the band to finish their new album, which they began writing and recording in 2019. Similar to "Book Of Souls," this album clocks in at nearly 82-minutes, making this the second longest Iron Maiden album and it will be released as a double-CD set and a triple vinyl set.

The album begins with the eight-plus minute title track "Senjutsu," led by the tribal drumming of Nicko McBrain. Singer Bruce Dickinson sounds amazing, hitting the high notes, as he delivers the storied lyrics of the opener. Iron Maiden quicken up the pace with "Stratego," which was one of two songs that were released as a prelude to the album. The other previously released track was "Writing On The Wall," which fits the Iron Maiden mold perfectly with undeniable guitar riffs and an unforgettable chorus sung by one of the strongest voices in heavy metal. The band take their time with the slower opening of "Lost In A Lost World," before the classic sound of chugging guitars gives that song an energy boost, before Iron Maiden showcase their progressive side by switching tempos once again.

The final three songs on the album average over 11-minutes in length, as each one takes you on a musical journey. Iron Maiden were never ones to shy away from a history lesson, in which they give with "Death Of The Celts." The musicianship during the song's ten-plus minutes is stunning, as you just have to sit back and admire how cohesive a unit Iron Maiden are in the recording studio. The longest song on the album is the nearly 13-minute length of "The Parchment," which explodes with every guitar solo, while the steady drums and bass keep a steady pace throughout the song. The album closes with "Hell On Earth," which builds into another iconic Iron Maiden classic with its gallop-style rhythm and chugging guitar riffs, as Bruce's vocals lead the way along with a more noticeable keyboard section. The song's 11-plus minute length seems to go by in a blur of classic heavy metal. To find out more about Iron Maiden and their latest release "Senjutsu," please visit ironmaiden.com.