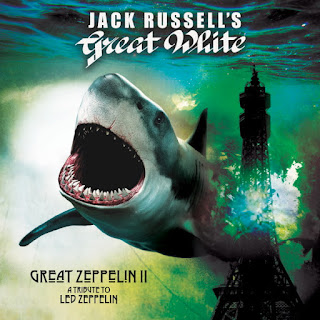 Back in 1998, the hard rock band Great White paid tribute to their idols, Led Zeppelin with an entire album of cover songs titled "Great Zeppelin: A Tribute To Led Zeppelin." It was recorded live at the Galaxy Theatre in Santa Ana, CA in 1996 and gave a slight resurgence to the band's waning popularity during the close of the nineties. Now, nearly 25 years later, Jack Russell's Great White pay their idols another honor with "Great Zeppelin II: A Tribute To Led Zeppelin," which will be released on August 13th through Dead Line Music in association with Cleopatra Records.

These new studio recordings of some fourteen Led Zeppelin favorites, finds the current line-up of the band motoring through the opening numbers "Whole Lotta Love" and "Good Times, Bad Times." Russell's vocals sound amazing, as he pulls off Robert Plant's difficult vocal deliveries on tracks like "Misty Mountain Hop" and "Kashmir." Jack Russell's Great White take you on a sonic trip with the mystical, ten-minute delivery of "No Quarter," as the band simply explode with passion and power. They also tackle some of the less popular Led Zeppelin tracks like "Trampled Underfoot," which comes off a bit gritter than the original, along with "The Rover," in which the band add a more blues strut to the song's overall sound. The new album closes with a beautiful rendition of the classic rock ballad "Stairway To Heaven" and a final hard rock blast in the form of "Communication Breakdown."

Jack Russell's Great White are currently on road, touring the U.S. For a complete list of tour dates, please check out jackrussellsgreatwhiteband.com. To find out more about the CD and vinyl versions of their latest release "Great Zeppelin II: A Tribute To Led Zeppelin," please visit cleorecs.com.