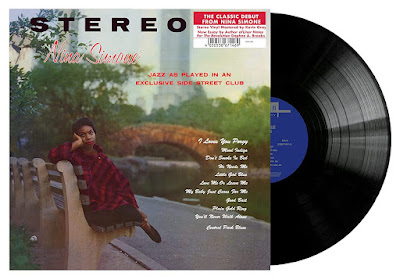 Rock and Roll Hall of Fame inductee and jazz legend Nina Simone was in her early twenties when she recorded her debut album in one day back in 1957. Simone's debut album "Little Girl Blue" was eventually released in February 1959 and found her covering such classics as "Mood Indigo," "My Baby Just Cares For Me" and "I Love You, Porgy." Nina Simone was also an aspiring pianist, as shown during the instrumental tracks "Good Bait," "You'll Never Walk Alone" and "Central Park Blues." As a testament to this beautiful debut album, BMG has recently released a newly remastered version of this timeless classic on CD and will be releasing it on 180-gram vinyl for September 3rd.

The vinyl was newly mastered by Kevin Gray and it features a newly written essay by Yale professor and author, Daphne A. Brooks. Right from the opening musical notes of the album, you get fully engulfed in the talents of Nina Simone. Her iconic vocals and sweeping skills on the keys of "Mood Indigo" are a "must hear" for any music fan. Next, she shows off her bluesy side with the emotional ballads "Don't Smoke In Bed" and "Little Girl Bed," as her voice is so smooth and inviting. Nina picks the tempo back up with her skills on the piano during "Love Me Or Leave Me," but it is her rendition of the Gershwin classic "I Love You, Porgy" that steals the show. This newly remastered version will allow you to hear every note in pure, studio quality. To find out more about this newly remastered version of Nina Simone's debut album "Little Girl Blue," please visit ninasimone.com.