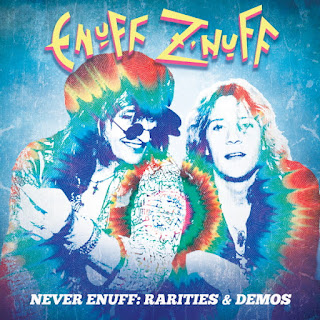 The late-eighties/early-nineties glam rock band, Enuff Z'Nuff have dug through their vault to bring us their latest release "Never Enuff: Rarities & Demos." This new multi-disc box set contains 40-tracks that have never been officially released before in any form. The songs were written by bassist Chip Z'Nuff and vocalist Donnie Vie, leading up to their gold-selling, self-titled debut album, which included the hit singles "Fly High Michelle" and "New Thing."

This new set begins with the addictive rock chorus of "Bye Bye Love," which has the band strutting their stuff with a more raw, seventies rock vibe, which eventually gets slicked down and over-produced later on. Enuff Z'Nuff's signature sound is definitely present on songs like "Say It Ain't So" and "Girl Crazy," while "Tears Away" has a more new wave, modern alternative feel for what the early eighties had to offer. Just keep in mind that some of these songs do not reach the high standards of their officially released albums, as the historical value of songs like "Just What You Want" and "Soldier's Story" is more important than the quality of the recording. As you listen to each disc, its amazing to hear some of these tracks that were buried gems, like the bluesy, glam riff of "Never Let You Go" and the pulsating, addictive chorus of "Number One," along with the energetic blast of "Higher."

During the "hair metal" days of the eighties and nineties, the power ballad was the song that would eventually sell albums for these bands and some of the songs on this set, burn with that passion, like "Valentine," "Will You Remember" and "Help." Enuff Z'Nuff's music was also filled with great, positive energy, undeniable guitar riffs and lyrics that would just stay locked in your brain, as this set validates that the band was more than just a one-hit wonder. This new set wraps up with the Sunset Strip glam rock appeal of "Cupid's Laughing" and "Look What You Do," as Enuff Z'Nuff continue to give fans the music they desire to hear again from their youth.

Enuff Z'nuff are currently on tour in the U.S. with dates running into October. For a complete list of shows, please visit enuffznuff.com. To find out more about their latest release "Never Enuff: Rarities & Demos," please visit cleorecs.com.