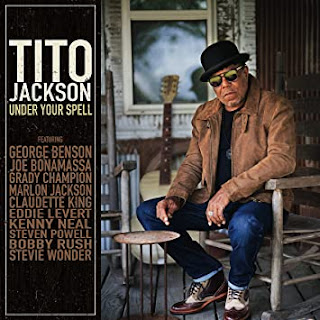 Arriving August 6th through Gulf Coast Records is the new album titled "Under Your Spell," from the legendary Tito Jackson. Jackson was one of the members of The Jackson 5 and managed his own sons with their group 3T, before Jackson started his solo career in 2003. Jackson's new album is only his second solo album and features some very special guests like George Benson, Joe Bonamassa and Stevie Wonder just to name a few.

The album begins with the upbeat blues romp "Wheels Keep Turning" and "Love One Another" (which is the perfect anthem for today's world), which features a stellar line-up of Stevie Wonder on harmonica and Bobby Rush on vocals. The beats get funky on the title track, "Under Your Spell," which includes some stellar guitar work by the equally legendary Joe Bonamassa. Tito dives deeper into the blues with the slow, chugging of "Big Leg Woman," highlighted by Jackson's velvet vocals and Kenny Neal's work on both the bass and rhythm guitar. Jackson once again delivers a classic R&B groove with "You're Gonna Push Me Too Far" and then pays respect to the late, great B.B. King with "Rock Me Baby," as George Benson lays down some great guitar licks, while Jackson duets with Claudette King (daughter of B.B. King) to turn this timeless blues track into a duet. Tito Jackson finishes his new album with the slow-moving "All In The Family Blues" about growing up in the Jackson household, along with the smooth, addictive R&B/pop delivery of "I Got Caught (Loving In A Dream)." To find out more about Tito Jackson and his latest release "Under Your Spell," please visit titojackson.com.