West Coast Rockers Cruzados! Return After 30 Years With A New Album And Line-Up 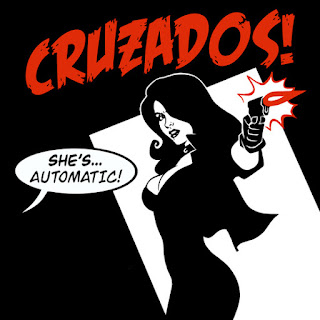 LA-based rock band, Cruzados! have returned with their first album of new material in nearly three decades titled "She's Automatic." Original bassist, songwriter Tony Marsico used that time during the pandemic to put together a new line-up of the band to execute these eleven new songs, along with some special guests. Cruzados! was originally signed to Clive Davis' Arista Records and produced two album, along with an appearance in the movie "Road House," before disbanding when the 90's hit.

The new album kicks off with the smoldering "On A Tilt-A-Whirl," which explodes with energy during the chorus, led by the great guitar-work of Loren Molinare and Mark Tremaglia. Crusados! adds a little southern swagger to "Across The Ghost Town," while the title-track "She Automatic" takes it up another notch with its punk-like fury and raw, rock-and-roll power. They take their foot off the gas for the acoustic-blues ballad "Sad Sadie," featuring John Doe (X) on backing vocals, before delivering the ZZ Top-style shuffle of "Long Black Car." Special guest guitarist Dave Alvin (The Blasters) give the Crusados! sound a more roots-based, country feel on "Let Me Down," which is highlighted by some fresh accordion riffs from David Hildalgo of Los Lobos. The band wrap up their new album with the great piano work of Buck Johnson, alongside the thick blues guitar riffs of "54 Knockouts," along with the final energetic blast of "Rock That Boat." To find out more about Cruzados! and their latest release "She's Automatic," please visit cruzadosband.com.