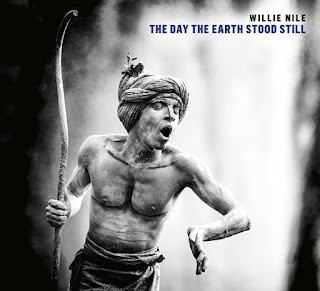 Arriving August 13th via River House Records is the brand-new studio album "The Day The Earth Stood Still," from one of the hardest working artists today, Willie Nile. He has released ten studio albums over the course of the last 15 years and his most recent effort was inspired by the pandemic lockdown. Nile recorded his new album in January 2021 with his live, touring band by his side, under the precaution of wearing masks and social distancing in the studio.

This new eleven track release begins with the high-energy rocking titled track "The Day The Earth Stood Still," which was directly written about New York City being shutdown and the streets being empty of life. Nile is arguable one of the best songwriters of our generation and this album only proves that statement with great memorable tracks like "Sanctuary" and "The Justice Bell (For John Lewis)." He switches up his straight-up rock and roll vibe with the funky blues-infused "Expect Change," which sounds like it belongs on a classic Rolling Stones album. Willie Nile takes the energy up another notch with the post-punk attitude of "Off My Medication," before wrapping up his new album with the inspirational words and acoustic strumming of "I Will Stand," along with the poetic lyrics of "Way Of The Heart."

Willie Nile and his band are ready to hit the road again with shows lined-up, beginning August 11th. For a complete list of dates and to find out more about his new album "The Day The Earth Stood Still," please visit willienile.com.