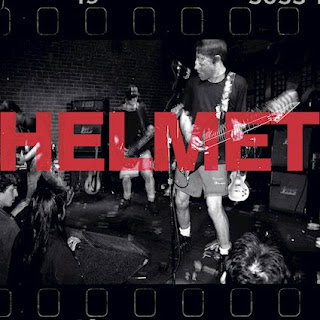 Be on the look-out this November for the first official live release from the alternative metal band, Helmet. Lead guitarist/vocalist Page Hamilton decided to dig through his old tapes of live shows for this release simply titled "Live And Rare." It features two shows (one from CBGB's & one from the Big Day Out Festival), as the band were still in the early stages of becoming a staple on alternative radio with their hit song "Milquetoast." These recordings sound pretty damn good for being shelved for over 30 years, as the first side features the band's six-song presentation of their set at the famed club, CBGB's. They deliver songs like "Impressionable" and "Your Head" with punk-like fury, while "Reputation" showcases more of Helmet's iconic, chugging rhythm. Helmet also debuted the song "Sinatra," filled with feedback, before closing with the intense two-minute chaos of "Rumble."

The flip-side of this new release features part of their 1992 show from Australia's Big Day Out Festival, as Helmet were promoting their second album "Meantime." Songs like "Ironhead" and "Give It " show more maturity in the band's presentation of their music, nearly two years after their appearance at CBGB's. Helmet finish off their appearance at the festival with the raw, classic sounds of "Blacktop" and "Turned Out," along with the chaotic closer "In The Meantime." To find out more about Helmet and their new live album "Live And Rare," please visit facebook.com/HelmetMusic.