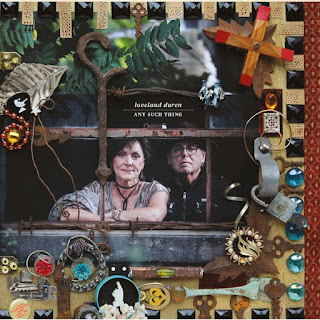 Singer/songwriters Vicki Loveland and Van Duran have teamed up once again for a new album titled "Any Such Thing." This is the duos third studio album and their first in the last five years. Inspiration for this album came from traveling the world for promotion of the indie-film "Waiting: The Van Duran Story," by writing and recording in many amazing studios along the way. The new album will be released on October 1st through Edgewood Recordings and features ten tracks that were created over the course of the last couple years.

The album begins with the contemporary rock touch of "Tumbledown Hearts," as their voices harmonize beautifully on the chorus of this opening track. Next, they incorporate some blues into the raw rocker "A Place Of No Place," as Vicki takes the lead on vocals, belting out the lyrics with a purpose. The energy continues with the pop melody of "Ain't It Pretty To Think So," while "Skywriting (Tasmania)" is a lovely ballad that showcases the duos wonderful songwriting ability. The folk rock appeal of "Where Are We Going" carries a nostalgic tone, as Van's vocals have that timeless appeal. Loveland Duran finish their new album with the up-tempo country rock tones of "Bridges I Had To Burn" and the quiet, gentle ballad "Ending Again," featuring some more great, undeniable harmonies. To find out more about Loveland Duran and their latest release "Any Such Thing," please visit lovelandduren.com.