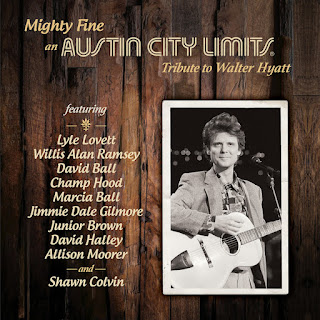 In the late seventies/early eighties, Uncle Walt's Band was one of the most popular country/folk bands in America. Their music influenced many artists including Lyle Lovett, Lucinda Williams and Jimmie Dale Gilmore, before the members went their separate ways in 1983. Lyle Lovett took a special interest in band member Walter Hyatt, producing his debut album and bringing him on tour, giving Hyatt a renewed interest in the music industry. He became an icon around the Austin, Texas music scene, before his career would be cut short in a plane crash in 1996. A year later, the Austin City Limits show paid tribute to Walter Hyatt with a special concert featuring many of his friends and fellow influenced artists. Now, nearly 25 years later, Omnivore Recordings is releasing the music from that Austin City Limits concert, along with six songs that were performed, but not shown during the television special. An extra bonus on this new release is four previously unissued recordings from Walter Hyatt making their debut on CD on "Mighty Fine, An Austin City Limits Tribute To Walter Hyatt" coming out  October 1st.

The show starts off with Willis Alan Ramsey performing a short, concise rendition of one of Hyatt's most well-known songs, "As The Crow Flies." Jimmie Dale Gilmore adds his special touch to the beautiful ballad "Georgia Rose," before the energy picks up with the country blues of "Are We There Yet Momma," performed perfectly with the big vocals of Marcia Bell. You can really appreciate the wonderful songwriting of Walter Hyatt during the stellar performances of "Tell Me Baby" by Allison Moorer and the lovely, touching duet between Lyle Lovett and Shawn Colvin during "Babes In The Woods." The show closes with Lyle returning for a solo rendition of "I'll Come Knockin'" and the whole ensemble joining in for the sing-along of "Aloha."

The six bonus tracks from the show consist of performances by Hyatt's fellow bandmates Champ Hood and David Ball, along with Lyle Lovett on the acoustic tracks "Rollin' My Blues," "Going To New Orleans" and "I'm Calling." Fans of Walter Hyatt will truly appreciate the four bonus tracks that showcase more of Hyatt's amazing talents as a singer/songwriter. His words paint the perfect picture "In A Christmas Dream" and his vocals are soft and pure during the country ballad "Early Days," before closing out this tribute with the rocking sounds of "Shouldn't Have Told Me That." To find out more about "Mighty Fine, An Austin City Limits Tribute To Walter Hyatt," please visit omnivorerecordings.com.