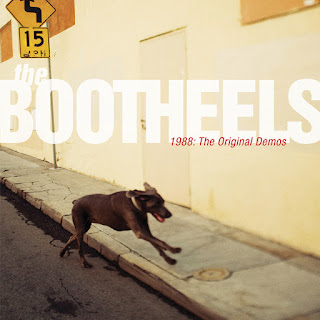 On September 24th, Omnivore Recordings will release the only known recordings of this fairly unknown band, The Bootheels. This California band came together for a brief period in 1988, without receiving much success outside of their little friendship circle, but each band member would go on to receive huge accolades on their own. The members of The Bootheels are Luther Russell (Those Pretty Wrongs), Jakob Dylan (The Wallflowers), Tobi Miller (The Wallflowers) and Aaron A. Brooks (Lana Del Rey, Moby) and for one moment in the late eighties, it was their first glimpse into the world of rock and roll.

Now for the first time, The Bootheels will release their "1988: The Original Demos" disc, which features a totally different sound than what you might have expected from this foursome. Kicking things off is "See It In Your Eyes," which sounds like it came straight from the blueprint of British punk music in the late-seventies, in which melody and singing were replaced by energy, speed and power. Their raw, unpolished, pre-grunge sound recalls the music of The Clash with "Thing Called Love," before slowing the tempo down for the underground alternative style of "The Deal." The Bootheels' California punk style was spread all over their songs, as displayed in the energetic romp of "Wasted Dime" and "Got Me On My Knees." They tried to show a bit more structure to their music with the addictive melody of "Halfway There," but instead find more pleasure in the punk furry of "Queen Of Hearts." This new release closes with a few of The Bootheels rough, unpolished recordings of their new wave sounding "Images Of You" and "Think Of The Time." To find out more about The Bootheels' "1988: The Original Demos" release, please visit omnivorerecordings.com.