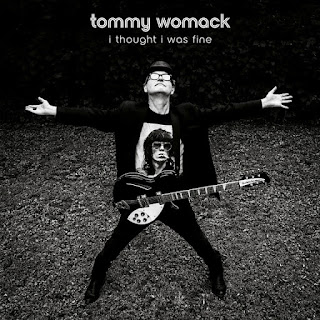 Nashville-based singer/songwriter Tommy Womack is returning October 15th with a brand new studio album titled "I Thought I Was Fine." This is Womack's eighth album and will be released through Schoolkids Records. It features thirteen songs that finds Womack plugging-in and rocking out, compared to his more well-known, laid-back Americana sound. He gets the energy flowing right from the opening chords of "Pay It Forward," which rides a steady drum beat, as Tommy makes the most of his time on the guitar, ripping off some great solos. He takes it up another notch with the punk-like furry of "A Little Bit Of Sex Part 2," as you can feel the freedom in the music he is producing on this new album.

He keeps things simply on "I Got No Place To Go," which makes it even more attractive to sing along to, while "Call Me Gary" is a storied tale, as Tommy paints a picture in your mind with his words. He turns the traditional country ballad "That Lucky Old Sun" into an up-tempo alternative rocker, before injecting the blues into the other cover song on Tommy's new album, "Miss Otis Regrets" (written by Cole Porter). Tommy Womack wraps up his new album with a return to his roots with the Americana strumming of "Job Hunting While Depressed," before closing with the quiet, acoustic folk ballad "I Wish I'd Known Better." To find out more about Tommy Womack and his latest release "I Thought I Was Fine," please visit tommywomack.com.